Not sure what to expect when your toddler goes to speech therapy? Here’s a helpful post written by a mama who took her one-year-old son and saw a huge improvement! Whether you’re trying to decide if speech therapy is the right option for your child, if it’s worth the investment (those sessions aren’t cheap), or have already decided and just want to know what it will be like, this post will hopefully give you a little insight!

We recently finished up a few months of speech therapy with our toddler, and the difference that it made for him (and us!) was like night and day.

Prior to going, I had no idea what to expect. I didn’t know how long it was going to last, what the sessions would be like, or if it would even help.

I thought it would be helpful for other mamas in similar situations to read a post all about what to expect when your toddler goes to speech therapy. Whether you’re trying to decide if speech therapy is the right option for your child, if it’s worth the investment (those sessions aren’t cheap), or have already decided and just want to know what it will be like, this post will hopefully give you a little insight!

Why We Decided To Get Our Son Evaluated

It wasn’t until our youngest son was over 18-months-old and still only saying “mama” and “dada” that we started worrying. We didn’t know how far behind he was, but we knew that our older kids were both saying way more by his age. Our pediatrician said to keep an eye on it and we’d reassess at his 2-year appointment.

But by 20-months we decided that we needed to get him evaluated. Our youngest son said five words (with “mama” and “dada” being used the most), got frustrated and cried when we didn’t understand him, and never repeated sounds when we tried to help him learn new words. It was hard for all of us and very different than what we had experienced with our first two kids.

I had a friend point out that he may have a hearing problem, but we weren’t worried about that because he followed directions and could point to things when we asked him where they were. We figured it was more a problem with his vocalizations than anything else.

Together we decided that it was better to get our son evaluated and have it be nothing than miss it and have it become a bigger problem later on. So we called around and made an appointment.

I brought my 21-month-old son to a speech language pathologist at a local Minnesota Children’s Rehab clinic for an evaluation last October. I had no idea what to expect, but was eager to get our son the help we thought he needed.

We met the speech therapist and went into a small room with two chairs and several toys. I filled out a little survey that asked questions about my son’s ability to listen, respond, and express himself. While I was answering the questions the therapist played with my son. She tried to get him to repeat things and watched how he behaved.

When I finished the questionnaire, the speech therapist added up all my answers and told me that our son was just a few points away from being below average. She said that speech therapy would help him with his expressive language and that it probably wouldn’t be a big speed bump for him. She wasn’t able to tell me how long he would need to go to therapy, but she did say that it wouldn’t be a long-term thing.

Grateful to have a plan in place, we scheduled our first appointment and headed home.

I started taking my son to therapy every week. His first appointment was at the beginning of November. We went into a room that was similar to the one he’d been evaluated in, I sat in a chair to the side, and the therapist would play with my son. 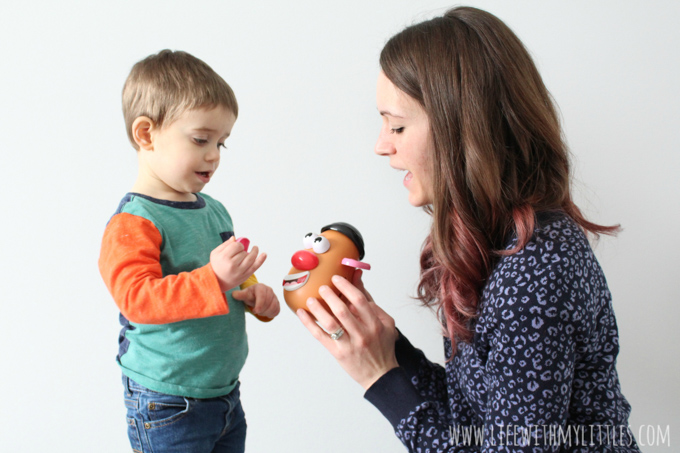 At the end of the session, the therapist got out some flashcards and would try and get my son to repeat the sounds on the cards: a picture of a dog panting with an “h” sound, a picture of a boat with a “b” sound. They started with consonants and then moved on to vowels.

At first my son was quiet and would only occasionally look at me and say “mama” during the sessions. But eventually he began to repeat the words the therapist was saying. Words with consonants at the beginning were easier for him to say than words with vowels, but he was improving.

Every session was the same. We’d come into the same room, my son would sit in a chair by the therapist with a little table on top for his toys, and I would sit to the side and just watch. They’d play with several different toys, they’d practice some of the flash cards, and then we’d go home. I know it sounds crazy, but after just a few sessions, my son was starting to talk more.

How We Practiced at Home

One thing that I loved about the speech therapist who worked with my son was that she gave us copies of the flash cards to take home and practice. We practiced them every day before nap time and bed time. At first he didn’t cooperate, but eventually, he had them all memorized and would say the sounds before I did. 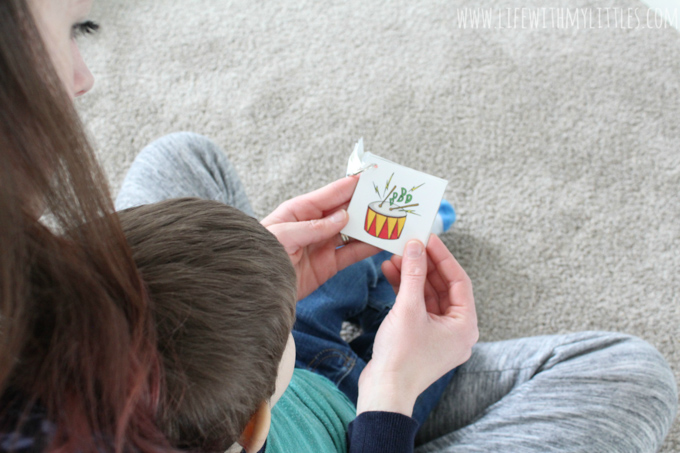 I also tried to do a lot of repetition when we were playing together, just like in the sessions. When we’d get a new toy I’d say what it was (“car”) several times while we were playing it. Sometimes he’d repeat the word, and sometimes he wouldn’t. I tried to use a lot of the same words that he practiced at therapy, too.

Another thing we did at home was I wouldn’t give him something unless he repeated the word first. For example, I made him say “please” or “more” or whatever the thing was (like “milk” or whatever) before I gave it to him. It took a while for him to figure out that he wasn’t getting things unless he talked, but once he did he started talking a lot more.

Why We Stopped Going

At the beginning of January, we made the decision to stop going to speech therapy. It was a tough decision, but there were two things that helped us make up our minds.

First, our sessions were not cheap. Some people may qualify for speech therapy through their school district, but we didn’t go that route, and even with our insurance, we were paying about $150 per session.

Second, our toddler was doing so well, learning lots of new words, and was repeating sounds and words that we worked on. He was a lot less frustrated at home (and so were we!) because he could communicate what he wanted most of the time. It made a huge difference. We decided we could continue doing what he was doing in his sessions at home, so we didn’t need to keep taking him.

When we talked to the speech therapist, she was on board with us finishing up, too. She had also noticed a big improvement in our son’s expressive language, and told us that if we ever had any questions or had any problems in the future, to give her a call. We had one last session, and our son was done.

Going to speech therapy for even just a few months made such a big difference in our son’s life. He says tons of words and has even started saying two and three word phrases (like “where Daddy?” or “want milk”). We still go through his flashcards sometimes, and we’re still aware of how we talk to him during playtime. I want to try and keep implementing what we learned in his sessions so that he continues to improve and keep talking.

I know that not every kid “graduates” from speech therapy in just a few months, but our son did. Going to speech therapy was a game changer for him, and we had such a good experience with it.

If you’re trying to decide if you toddler should go to speech therapy, talk to your pediatrician. And if you disagree with what they said (like if they tell you just to keep an eye on it and you’re still worried), it’s okay to go get your child evaluated! You know your child and can probably tell if something’s wrong, especially if you have older kids who may have been talking earlier or more.

And if you’re thinking about or preparing for speech therapy, hopefully now you know a little more of what to expect when your toddler goes to speech therapy.

And if you have any questions, feel free to comment and ask! I’d love to answer any questions about our experience! It was great!