If you’re preparing for your second baby, this is a great post to read! Here are a bunch of things I did the same with my second baby and why! 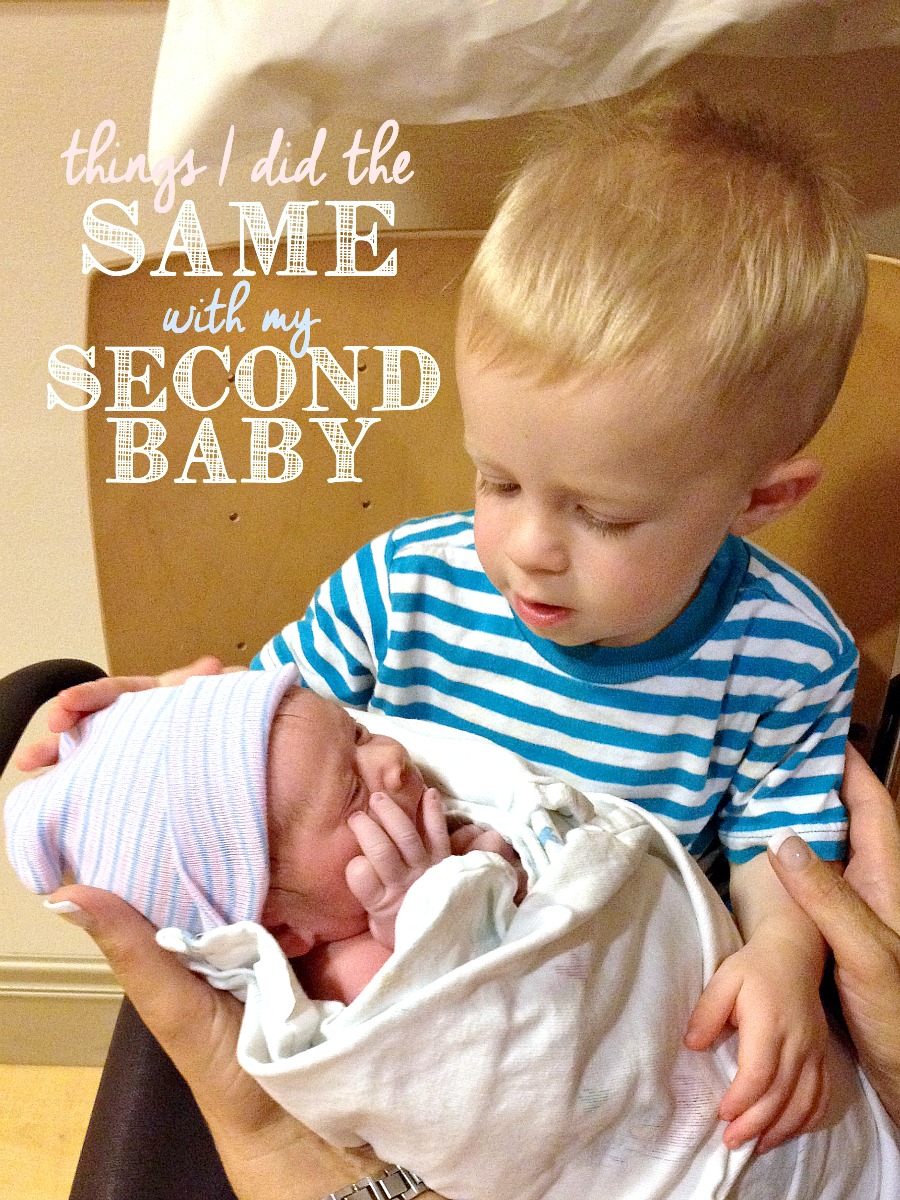 2. We waited until the second trimester to announce the pregnancy publicly. This is a very personal decision and it’s different for everyone, but we didn’t announce our first or second pregnancies publicly until the second trimester. You can read more about why here, but basically I would hate to miscarry and have to be constantly telling people who weren’t that close (aka, most of Facebook or random church members) that I lost the baby.

3. Found out our baby’s gender at 20 weeks. I am not one of those people who could just plan a gender neutral nursery and have a bunch of yellow and white clothes for their baby and plan on being surprised at the birth. Woo hoo for those people, but it’s just not me. So with both of my pregnancies, we found out what gender our baby was.

4. Packed hospital bags weeks in advance. I am also not one of those people who waits until the last second to pack their hospital bags. I packed my hospital bag and a bag for my baby both at least a month before my due date. You never know what is going to happen, even if you’re having a normal pregnancy. I didn’t want to be caught unprepared!

6. Sent babies to the nursery at night while in the hospital. I know some people think this isn’t for them and that’s fine, but after having a baby and all the work it takes, I just need to sleep for a few hours. I never had any problems with breastfeeding and the nurses always would bring my baby to me during the night so I could feed him/her, so it’s not like I was abandoning my baby. And I also think it’s great that you can take advantage of that extra help while you can since when you get home you’re 100% in charge. Thank heavens for the nursery and those sweet nurses who let new moms sleep a bit.

7. Breastfed as soon as they were born. I breastfed both of my kids as long as I could (8 months, 6 months), and one thing that I think helped me a lot was breastfeeding as soon as possible after birth. With my daughter it was a little sooner because my son had to be checked by the NICU real fast, but I did it as soon as I could with both of them and it helped our breastfeeding journey go smoother.

8. I was strict about naps. Naps are God’s gift to mothers. So I have always been pretty strict about making sure my kids get their naps and they aren’t interrupted. I try and schedule appointments around them, go shopping around them, and if I get invited to do something during nap time, I will say no. My babies get grumpy when they don’t get enough sleep, so making sure nap time happened has always been important to me.

9. Made sure people were healthy before holding my babies. Especially during the first few months. We made sure our families who came to visit all had their whooping cough shots, and anyone who came to meet the babies had to use hand sanitizer or wash their hands before holding baby. Newborns are especially vulnerable to diseases since obviously they don’t have their vaccinations yet (I’m very pro-vaccination), so I made sure to be careful with our precious babies.

11. Weaned them off of night feedings around four/five months. Once my babies were big enough to be able to sleep through the night, I definitely encouraged it by weaned them off of night feedings. It’s not super hard to do, but it takes a little time so you do it gradually. Anyway, it was great for us and especially for me because it helped them to sleep through the night!

12. Used swaddles. I used the same swaddle blanket for both of my babies, the SwaddleDesigns Ultimate Receiving Blanket

. It was big enough to swaddle them for a few months, and it held up great through two babies. We actually tried to take the swaddle away from Little A for a while, and she basically stopped napping for a full month, so it was back to swaddling to save everyone’s sanity. Anyway, swaddles are a must in my book.

13. Introduced a wide variety of foods. I do not want picky eaters, so I always try to give my kids a wide variety of different foods from an early age. Even if they didn’t like one of the baby foods we tried, we kept trying and trying until they did. Little A did not like carrots, but eventually she learned to like them! It helped both of them not to be picky (at least until the wonderful toddler phase).

, but still. It made a lot of difference when we used the sound machine and it was easy to wean them both off because I just turned it down gradually until it wasn’t even on anymore.

diapers. I seriously love Pampers, and I like their rewards program that they have, too. Anyway, they are by far, the diaper I would recommend to any mom. Plus I feel like there are always coupons you can print or get from the paper for them!

16. Took monthly baby photos. I know some people say that they take less pictures with their second kid, and while I feel like that was sort of true for me, one thing I did not fail to document was her growth. I took monthly pictures with some little iron-on stickers every month and loved how I was able to track her growth during her first year. We did stickers with Little J and by the time he was about 8-months-old and could figure out that the sticker came off, it was impossible to get a picture with the sticker on. If you need some cute ideas, you can check out this roundup post for inspiration.