Here are all the details about the potty training method we used to get our almost 3 1/2 daughter using the potty in less than a week! 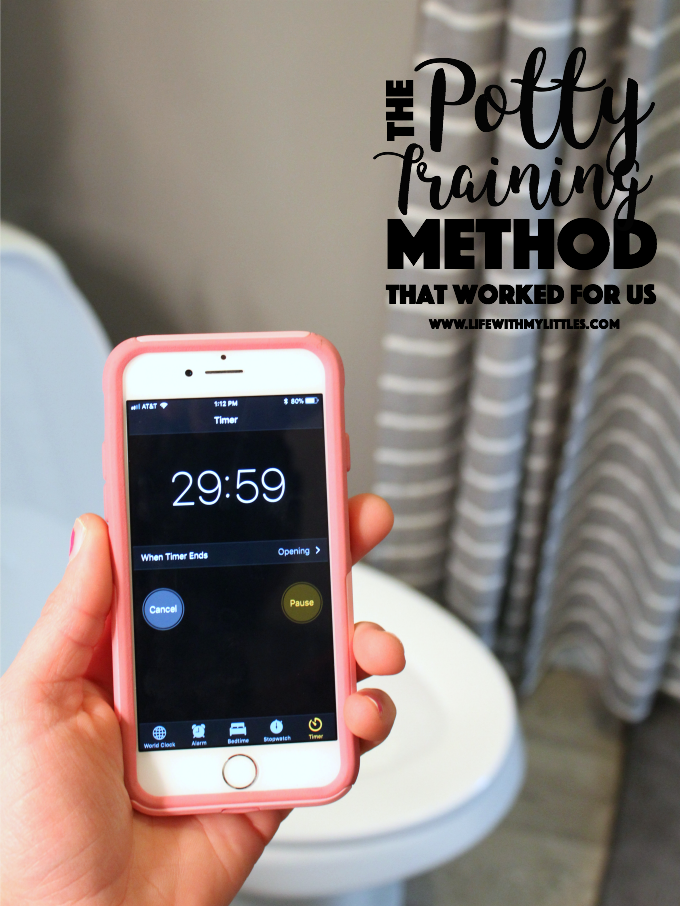 In February, we finally discovered the potty training method that worked for our daughter in less than a week. And it has been amazing.

So if you’re here looking for a new method to try, you’re in the right place. Make sure you’ve got everything you need on hand and you’ve got realistic expectations, because potty training is hard. Here’s how we potty trained our daughter in less than a week:

1. We committed. Besides your child’s readiness, your commitment to potty training is the most important thing in getting your child trained. If you give up after a day, it’s not going to happen. But if you keep at it, it will.

4. If she didn’t go potty, we had her try again in 15 minutes. In the beginning, we would have our daughter sit on the potty, she wouldn’t go, and then a few minutes later, she’d pee or poop her pants. So we quickly realized that if she didn’t go, we needed to have her go a few minutes later. It might seem extreme to have them try this often, but I’m telling you, this is what worked for us.

5. We didn’t have one big reward. With our son, we promised him a trip to Disneyland if he got potty trained. We tried lots of big rewards with our daughter on the first few potty training attempts, and she honestly didn’t care about any of them enough to potty train. So instead of bribing her that way, we just left that out of the equation.

6. We gave her a single M&M when she would go pee, and two when she would go poop. This was the only reward system we used for her. No stickers (that didn’t work the first few times we tried training her), no toys, only a very small treat. And it was exactly what she needed. Immediate gratification!

7. We ditched the training pants and put her in undies. That girl. Training pants were basically diapers to her and she could care less if she peed or pooped in them. So we told her we didn’t have any more and that she had to wear undies from then on. It worked because she was actually uncomfortable when she made a mess in them, and she could absolutely tell when she had an accident.

9. We pumped her with lots of fluids. I got special juice boxes for her and she drank a bunch of them. It kept her hydrated enough that she had to pee a lot, making it more likely that she would go on the potty every thirty minutes. We normally don’t give our kids juice, so it was a special treat for her.

So that’s how we did it! That’s the potty training method that FINALLY got our almost 3 1/2 year old daughter to figure out how to use the potty. The last two months have seriously been incredible (no dramatization there). Only having one in diapers again has been THE BOMB. If you’re feeling desperate and so tried of changing disgusting big kid poops like we were, hang on. Your child will potty train eventually! They can’t go in their pants forever!