7 Cute Pictures to Reveal Baby’s Gender: Easy, cute, and simple picture ideas to reveal if you are having a boy or girl! 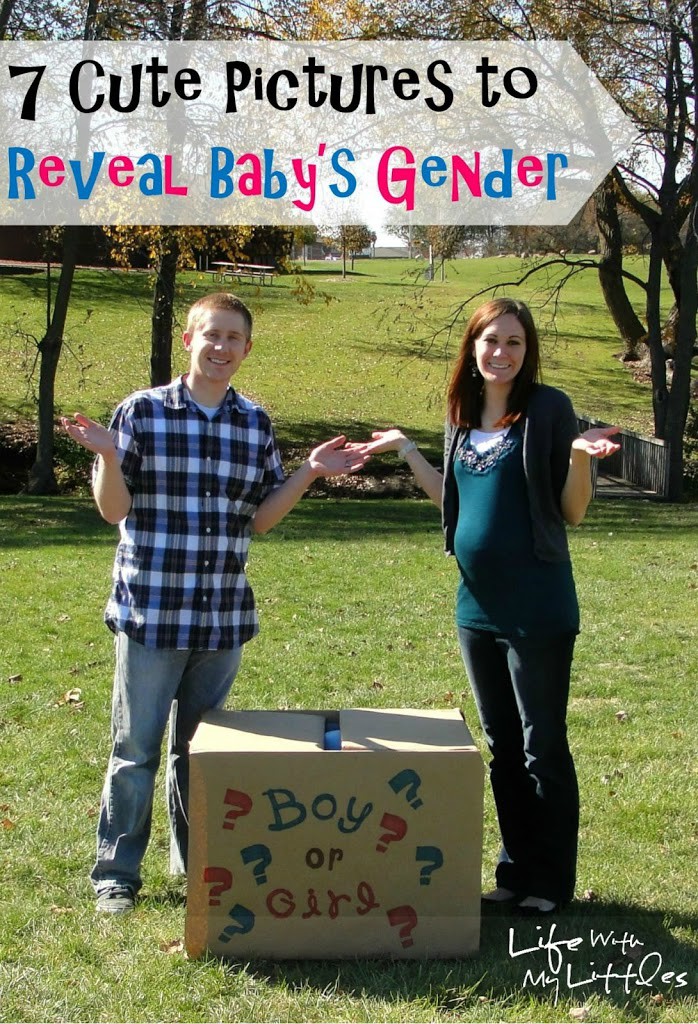 Revealing baby’s gender has become almost as special as announcing your pregnancy. It takes just a simple Pinterest search to find all kinds of cute picture ideas, food suggestions, and party activities. Since we found out what baby #2 was last week, I thought it would be fun to do a gender reveal roundup of some of my favorites picture ideas that are easy and fun! 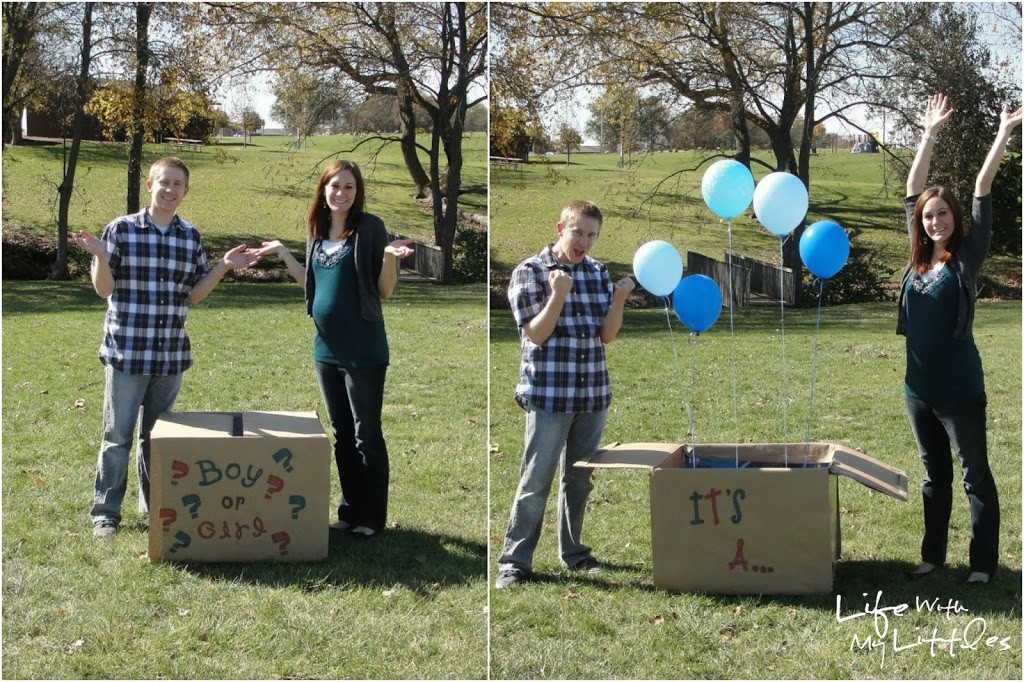 1. Box of Balloons. For our first pregnancy, we decided to do our gender reveal using a giant box and some colored balloons. I just covered the box in brown wrapping, stenciled on some words, and then we filled it with balloons. Really easy, and fun to take pictures with. Plus it can be done as soon as you find out what you have because if you have the box ready to go, you just have to buy balloons and take pictures! 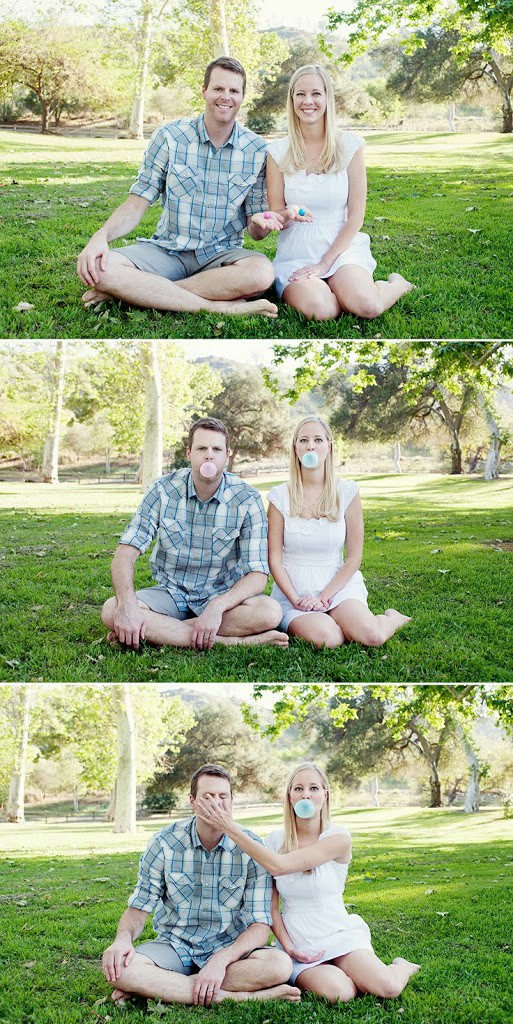 {via The Letter B Photography}

2. Bubble Gum. I saw this one on Pinterest a few months ago and thought it was just the cutest thing. And again, all you need are blue and pink gumballs. Just blow a bubble and pop whichever one the baby is not going to be! Easy and way cute. 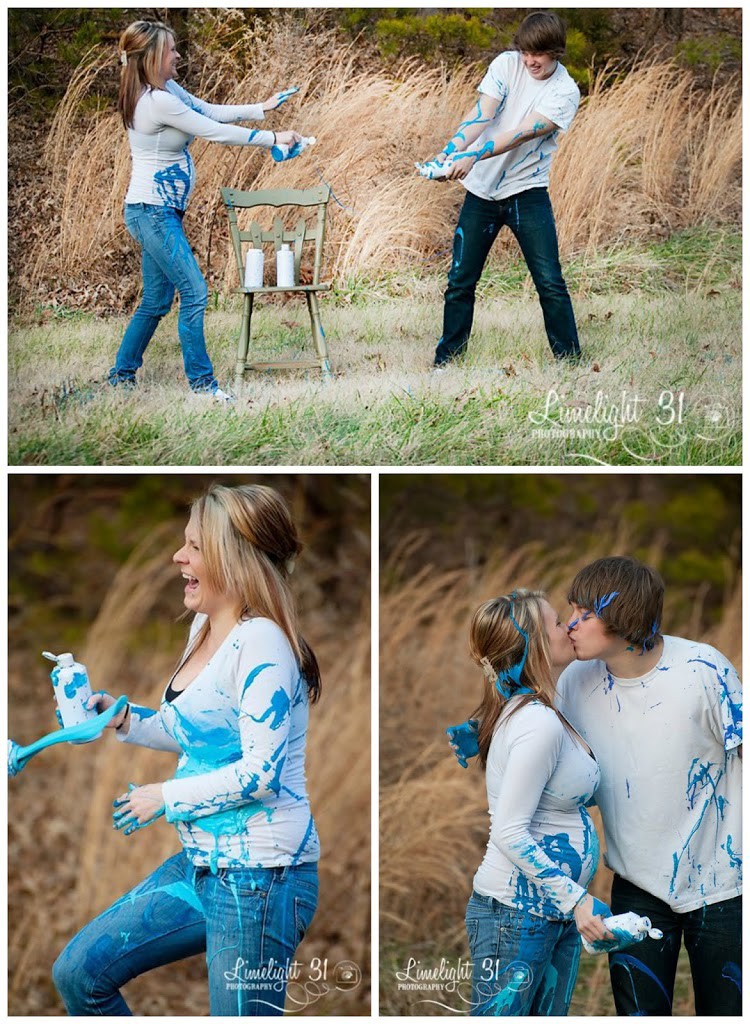 3. Paint Fight. Okay, so this is a little messy, but I thought it was so cute! And if you have older kids, they can get involved, too! Start out wearing white shirts (and pants you don’t really care about) and then either throw paint, shoot it from a water gun, or just use paintbrushes and get messy! You definitely won’t forget this one later, and it would make for cute pictures in your baby’s new room. 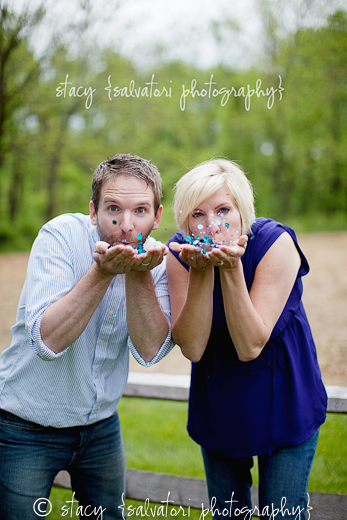 4. Blowing Glitter. Another fun and easy way to reveal your baby’s gender is simply to blow glitter or confetti at the camera! All you need is glitter the color of your baby’s gender and ta-dah! It might take a few tries to get a good one, but it would be fun! 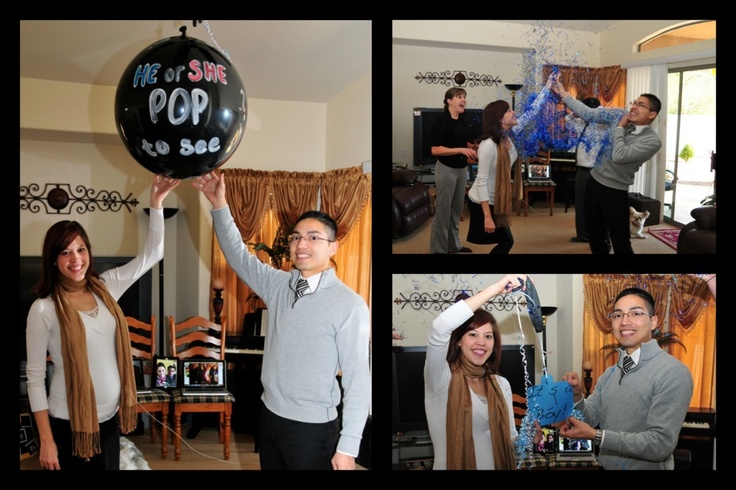 5. Pop a Giant Confetti-Filled Balloon. Okay, so balloons are involved in several of these, but they make for great pictures! My brother-in-law and sister-in-law did this one and it turned out super cute (that’s not them above). Just get a dark balloon and fill it with the color of confetti you need, and then pop! You get showered with blue or pink confetti! And again, all you need are a balloon, confetti, and something to pop it with!

6. Balloon Blow Up. Just take a blue balloon and a pink balloon, and then blow up whichever one your baby is going to be! Easy and fun (are you seeing a theme?). You can write “G” and “B” on the balloons, but I think it is cute either way. 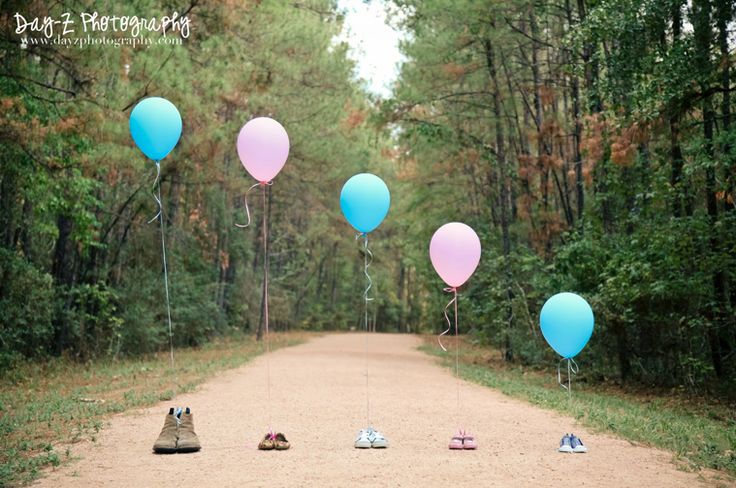 7. Shoes and Balloons. I have seen several pictures that just have the shoes, but I love the balloons added in this picture! That way you can get a good shot without being too close, and you can still see what the gender will be! This one is especially good if you have a big family and a close-up shot of the shoes would have a lot of blank space above and below. But seriously, love this one.

So now, the moment you have been waiting for. Are we having a boy or a girl? Will Little J have a baby brother or a baby sister? Well, we found out on our anniversary, and then the next day I went to see my family for my sister’s graduation. I thought it would be a cute idea to give her flowers and then a card with a secret message inside. It was quite a success, and my family was very excited! It wasn’t the most creative way to announce what we are having, but since I was traveling I didn’t have much time to put something together. 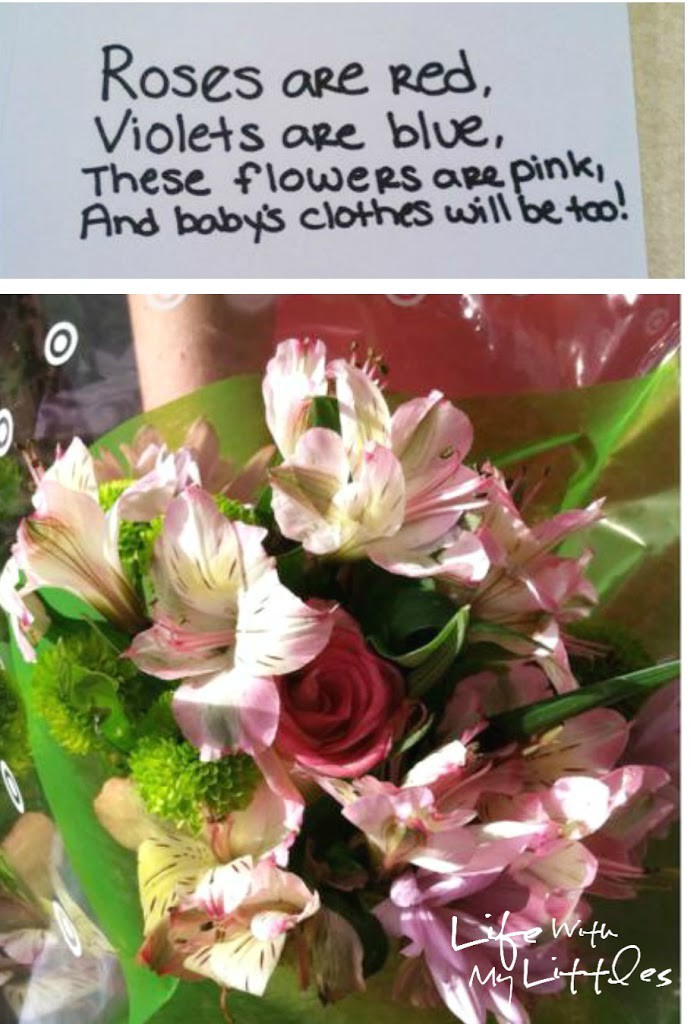 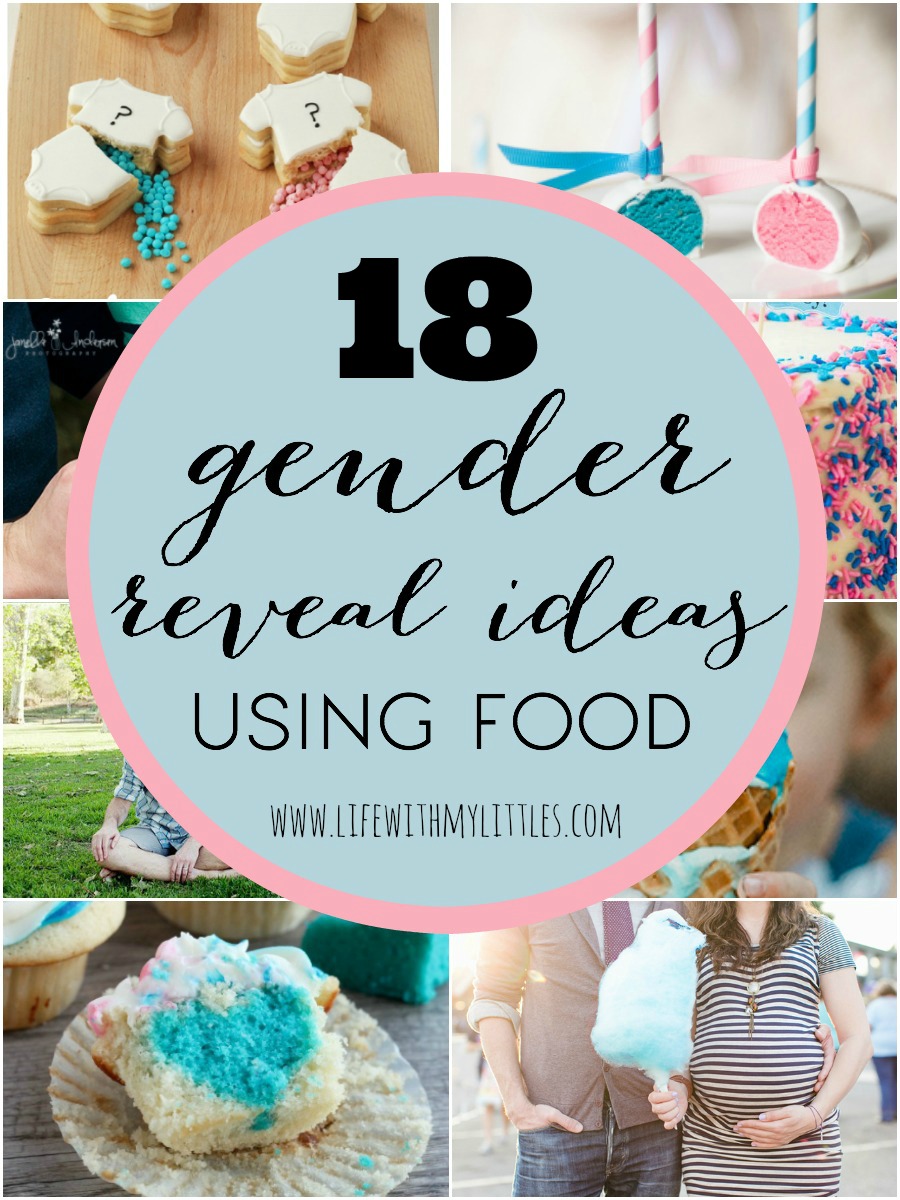