The best breastfeeding products recommended by real mamas! Breast care, breastpumps and accessories, breastfeeding helpers, and things for helping make breastfeeding more comfortable are all included! A great post for a new nursing mama or an experienced nurser! 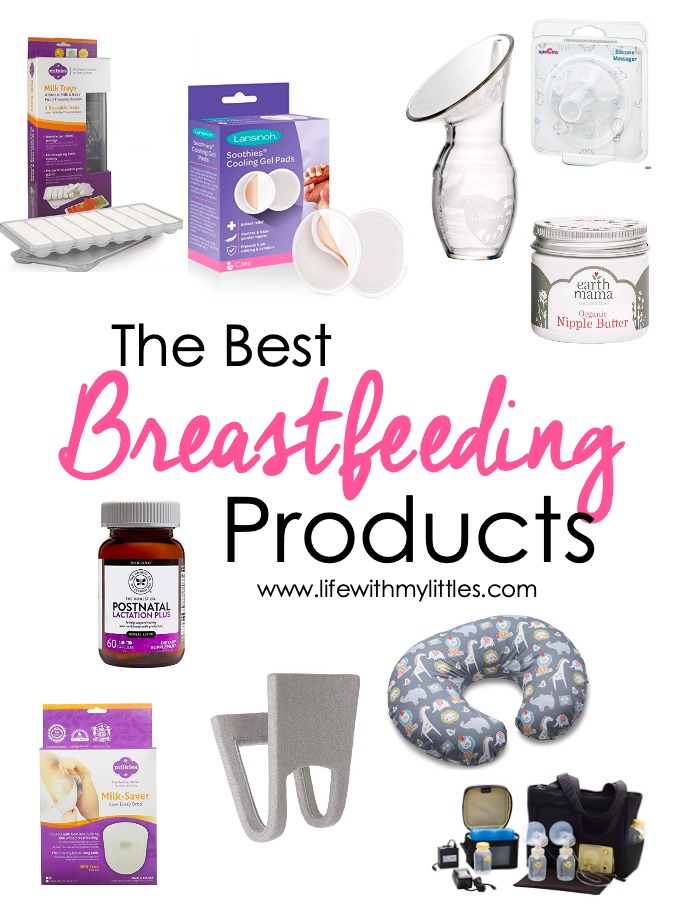 Did you even know that was a thing? Well now you do! It’s an annual campaign sponsored by the World Alliance for Breastfeeding Action and the goal is to protect, promote, and support breastfeeding worldwide.

I’ve been lucky enough to breastfeed all three of my babies, and I know from personal experience that breastfeeding can be made a lot easier and a lot more comfortable when you have the right products and accessories to support you!

There are a lot of awesome products that I wish I had used with my babies that I didn’t even know about until after I was done nursing. I’m going to guess that a lot of mamas probably don’t know about them all, so today, in honor of World Breastfeeding Week, I thought I’d share some of the best breastfeeding products that I have loved, that I’ve heard great things about, and that some of my mama friends have recommended! I’ve breaking it down into category (breast care, breastpumps and accessories, breastfeeding helpers, and things for helping make breastfeeding more comfortable). This post is basically just a great resource for any new or experienced breastfeeding mama!

. I was lucky enough to use these little things from day one of breastfeeding my first baby, and they were lifesavers. They’re basically like ice packs for your breasts, but without making them freeze. They’re soothing, cool, and perfect for nipples that are in pain and breasts that are aching. A must-have for the beginning of breastfeeding.

. I used this brand of lanolin for all three babies and it was great. It helped my nipples feel better when they were raw and chapped, and I made one small tube last the entire time I nursed each kid. You don’t have to wipe it off before you nurse again, and it’s 100% natural and hypoallergenic!

Earth Mama Organic Nipple Butter. I heard about this first on The Birth Hour podcast, and then again a few months later at Gearapalooza Minneapolis. It’s similar to lanolin, but it’s lanolin-free, restorative (unlike lanolin), moisturizing, organic, and non-sticky. You don’t have to wipe it off before nursing, and you can even use it on other dry parts of your body! I would definitely recommend this one and I haven’t even used it myself! But it sounds dreamy!

. I haven’t used this either, but it was recommended by another mama and sounds awesome! It’s similar to the Earth Mama Nipple Butter in that it’s organic, restorative, and you don’t have to wipe it off before nursing. It only has five ingredients (extra virgin olive oil, beeswax, shea butter, marshmallow root, and calendula flower), and the anti-microbial properties also make it an ideal salve for soothing baby acne! Cool!

. I haven’t used these ones, but I had multiple people recommend them as the pads they used while breastfeeding (the pads I used for all three babies have actually been discontinued because Babies R Us doesn’t really exist anymore!). They have stickies on the backs so they won’t move around in your bra (very helpful for preventing leaking!), which is something I loved about the pads I used when nursing! I also pretty much only used disposable pads, so I very much support these!

. I don’t know if this breast pump is still as fabulous as I thought it was when I used it, but it’s like the Cadillac of breastpumps. It’s electric, is super easy to use, doesn’t come with a ton of pieces, has a nice tote you can discreetly carry it around in, comes with a portable battery pack, and lasted me through breastfeeding three babies over the course of almost five years. It’s wonderful. I had a few other mamas recommend Medela breastpumps, although none specifically, so I’m just highlighting this one, since I know it’s good.

. As far as manual pumps go, this one is amazing. The pump itself is just one piece, it’s made of silicone so it’s comfortable, and it’s small so you can definitely bring it around with you wherever you go. You can attach it to the breast you’re not nursing on and it will catch milk expressed during let down, and all you have to do to clean it is boil it for 2-3 minutes. I haven’t used this one, but I would have if I’d known about it!

Spectra Silicone Breast Massager Inserts. I know this has a weird name (massager?!), but it’s a great product. If you’ve ever pumped before, you know that sometimes the flanges are too big or don’t fit quite right. These little babies go right into the flange and help make them fit your breast better! They’re compatible with 24mm and 28mm flanges, and they change them to 22mm. They also help cushion and massage the breasts during pumping, stimulating the milk ducts around the areola and breasts to increase milk flow and stimulate an earlier let down. If you’re a frequent pumper, I highly recommend checking these out!

Hands-free pumping bra. I don’t have any specific brand recommendations here, but since pumping is already the worst (does it make anyone else feel like a cow?), a hands-free pumping bra makes it a little easier! Basically, it’s a bra that holds your pump onto your chest so you don’t have to sit there holding your breastpumps on! I’d also highly recommend these for frequent pumpers, especially if you want to do something else with your hands while you’re pumping (like read or work on your computer or something).

Freezer bags. I loved the Lansinoh

freezer bags, but I also have heard the Medela

ones are great, so either one works! Even if you don’t think you’ll be pumping frequently, I would recommend getting at least a package of these (especially if you’re going to be using some milk catchers, which I’ll talk about below). Expressed milk is basically like liquid diamonds, and wasting even an ounce cuts you to the core. Save anything you express, preferably in the freezer so you can thaw it and feed it to baby later (and duh, you have to have somewhere to freeze the milk, hence freezer bags).

. Your other option besides freezer bags are Milkies Milk Trays. These things are GENIUS. If there’s anything wrong with freezer bags, it’s that you either have to freeze a decent amount of milk in each bag (which sometimes you end up wasting), or you have to freeze a little bit in each bag and waste a lot of space in them. That’s where Milkies Milk Trays come in. You freeze your milk in one ounce sticks that fit into the opening of any bottle. WHAT? I KNOW! This way you can thaw as many or as few ounces of milk as you want, and no milk gets wasted. Like I said, GENIUS.

While we’re on the subject of breastpumps, I also want to give a shout out to Aeroflow Breastpumps, which is an awesome company that helps mamas qualify for breastpumps through their insurance. This post isn’t sponsored in any way, but in my experience, getting a breastpump and dealing with insurance was dang complicated and the insurance and hospital were telling me different things and I ended up having to pay full price for mine, which was a huge bummer. Anyway, they do great work and I definitely recommend checking them out if you haven’t gotten yourself a breastpump!

. Another genius product from Milkies! You know how when you nurse and you have your let down and both breasts fill up and start leaking? Well that’s great for the breast your baby is nursing on, but what about your other breast just spraying into your nursing pad? Wouldn’t it be great if you could collect that milk and save it somehow? With Milkies Milk-Savers you can! You just slip one over your nipple on the side your baby isn’t on and it collects milk that leaks out while you’re nursing your baby on the other side! Think of all the ounces of breastmilk you could save using one of these! I wish I had had these when I was nursing because I probably could’ve saved up so much that I wouldn’t have ever have had to pump!

Nipple Shields. Not everyone needs a nipple shield, but if you have trouble getting your baby to latch, your baby is premature, or you have flat or inverted nipples, a nipple shield might help. I haven’t ever used one, but my sister has, and she said it was the only way she could get her youngest to nurse. Just make sure you know how to use one properly before you use it!

Fenugreek. Fenugreek is an herb used for helping increase milk production. I had a few mamas recommend it, and I used it with my third baby and I think it helped. There are several breastfeeding supplements with fenugreek in them (The Honest Company

), so do your research and decide for yourself if you want to try it.

Lactation Cookies. Yup, these are a thing. You can buy them premade

, or make your own. Some people might think they’re silly, but I think they helped me when I was nursing my third! Plus, why wouldn’t you want to eat more cookies in your life!?

. This was another thing I didn’t hear of until after I was done breastfeeding all of my babies, but it’s a genius idea! It turns any seat you’re in into a rocker! You can rock wherever you are, which is awesome for anyone who doesn’t have a rocker or who nurses their baby in other places besides the nursery!

. A friend recommended this one, and it’s pretty similar to a Boppy, but it’s not quite as curved. Instead of a C, it’s more of an obtuse angle, if that makes sense. It looks comfy and would definitely work in the same way. You just have to decide which one is right for you!

Nursing Cover. I know nursing covers aren’t for everybody, but if you nurse in public a lot and aren’t comfortable with just pulling up or pulling down your shirt, a nursing cover can be awesome. When my first baby was born I only had one that covered the front of me, and I hated it. I made a full-coverage one when my daughter was born and I was so much more comfortable with it. You can get the tutorial here (it’s so easy, takes less than five minutes, and all you have to do is sew a straight line). Or you can buy one like this

(hint, it’s so much cheaper to make your own!).

If there’s anything else you’d like to recommend or you think should be added to this list of the best breastfeeding products, I’d love to hear it! Leave a comment and let me know!

Breastfeeding is such an incredible gift we have. Not everyone nurses for the same amount of time, and that’s totally okay. Hopefully this World Breastfeeding Week you can remember to support everyone, no matter how they feed their baby, and hopefully you’ve found something helpful on this list to make your breastfeeding experience more enjoyable!