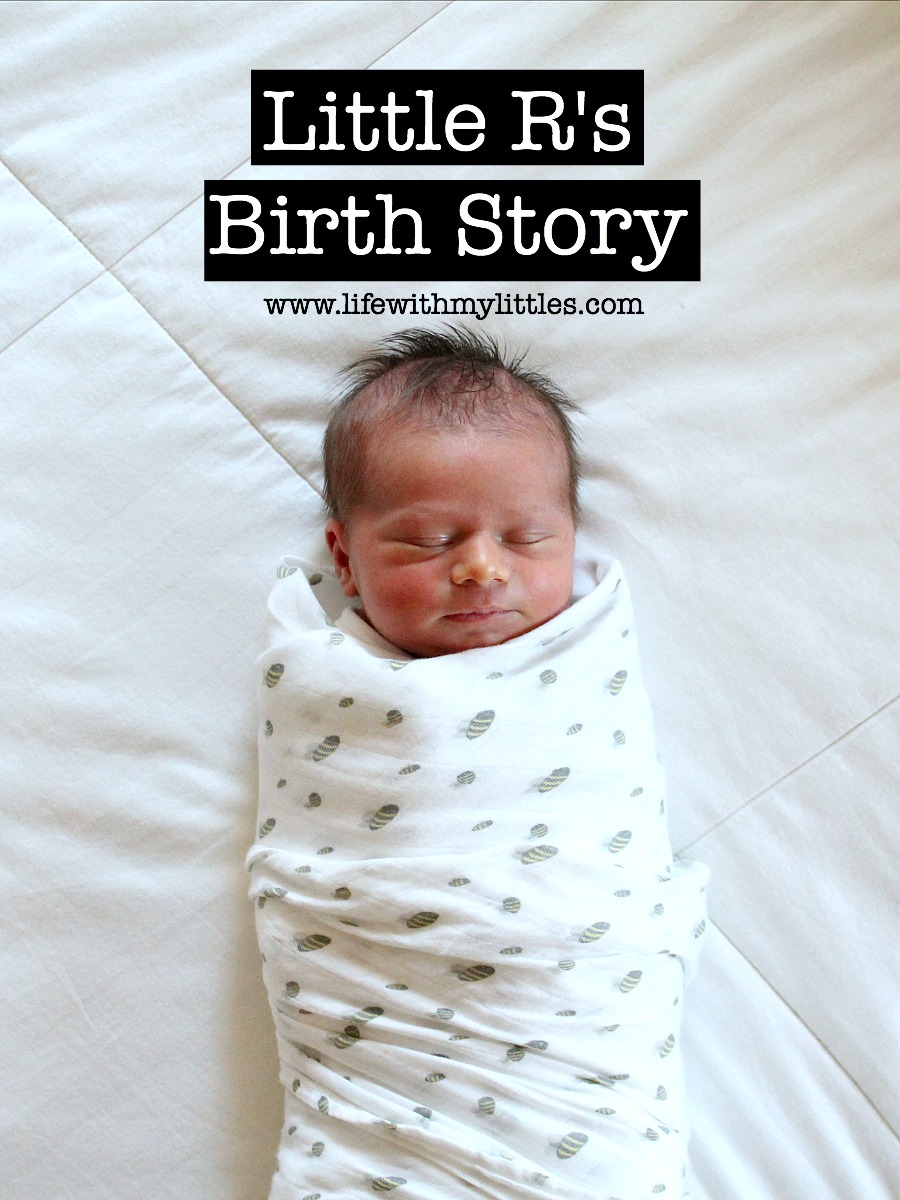 If you’re anything like me, you probably love a good birth story. I shared Little A’s birth story on the blog when she was born 2 1/2 years ago, and since I’ve been doing pregnancy updates this time around, I thought I would share the birth story of our newest little arrival! (You can also listen to me talk about it on The Birth Hour podcast here!)

From day one, I knew I didn’t want to be induced with this baby. I was induced with both Little J (three days late) and Little A (one week early). So I had never felt what it was like to actually go into labor, and I knew that I wanted to try my best to not get induced with this baby. I had been having Braxton Hicks since about halfway through pregnancy, so I thought maybe that was a good sign. I also had planned on trying not to complain as much as I had with my first two pregnancies, but this third pregnancy was rough. By the end, I could barely walk around the house, sit on the floor, or even roll over in bed. To say I was miserable would be an understatement.

So about 10 days before my due date, my husband and I agreed to start trying to get things going. With our first two, I never dilated past a 1 on my own, so we were hoping that this time it would be different. On Wednesday, he got off of work early so we went and walked/hiked at a local park and had lunch at HuHot (where I got two plates of mega spicy noodles). I also had my membranes stripped and bounced on my friend’s exercise ball for a few hours in the evening. That night, I woke up in the middle of the night with contractions that felt more real and were about 10 minutes apart. They weren’t super painful yet, but I felt that they were a little more than Braxton Hicks. I got my hopes up, but after a few hours, they went away. It was a bummer. I later googled it and found out that I had experienced prodromal labor, which is super annoying and not fun at all.

On Thursday I did a bunch of bouncing on the exercise ball again, and pretty much thought about going into labor the whole day. It was really stressful, but that night I lost my mucus plug and started getting excited again. Alas, nothing happened.

On Friday the Braxton Hicks came and went throughout the day, and I bounced on the ball several times, too. That night I had prodromal labor again like I did on Wednesday night. Again it went away.

On Saturday I was feeling pretty frustrated because I felt like something should be happening but nothing was. I tried to relax and didn’t do any bouncing or walking or spicy food eating. My husband gave me a massage in the afternoon to help me relax, and even though I usually hate massages, it helped!

On Sunday morning (January 29th, 39 weeks exactly) I woke up at 4:00 with contractions again. I thought they might be prodromal labor, so I tried not to get my hopes up. I started timing them and they were about 10 minutes apart. Around 7:30 I got up to go to the bathroom and had a little bloody show. I shouted to my husband what had happened, and even though I was trying to stay calm, I felt my excitement rising again. I kept timing the contractions because I could feel them in my belly and in my back, and they just kept coming, even though I was walking around and drinking water and everything.

We decided to go to church (aka, I decided because I didn’t want to sit at home and think about going into labor or not going into labor). We had made the mistake of telling our kids that baby might be coming today, so Little J kept telling people at church that our baby was going to be born that day. The contractions kept coming the whole time we were there, and by the end of the three hours, they were about 7-8 minutes apart and I was having to brace myself and breathe through them.

When we got home we decided that it was probably time to go to the hospital because I was having to bend over and stop what I was doing when the contractions hit. I gathered up the rest of the stuff for my hospital bag and my husband fed the kids some lunch before we dropped them off at some friends’ house and headed to the hospital.

We got there about 1:30 and when we checked into the triage, it took them a while to get the doctor so he could check me. The contractions were still coming but they were about 8 minutes apart, so I started feeling pretty discouraged. When I was checked at 2:00, I was 4cm dilated, which was promising because I’d only ever been a 1 the whole time before I was induced with Little J and Little A. They did an ultrasound just to make sure everything looked good and baby boy was head down and measuring about 8 1/2 pounds. We asked if we could walk around the L&D floor to try and get things to progress more (I had to be at a 5 to get admitted and a big part of me kept thinking that we were still going to get sent home), so we walked in circles around the floor while I ate ice chips and we tried not to focus on going home.

The contractions kept getting stronger and more painful, and by 4:30 I was having to stop and double-over while holding onto my husband for each one. They hurt a lot, so we decided to go get checked again. I was 5cm and 50% effaced, so we were told that we were going to get a room and we were going to have our baby! They also said that if we wanted to wait a little bit, they were cleaning the big room they had, so we decided to wait. We got into the room at 5:15 and the anesthesiologist was there and ready. I got my epidural at 5:25, not a moment too soon, because I was having a really hard time getting through each contraction.

After I got my epidural, it really hit me that we were going to meet our little boy soon and I started crying a little because I was so excited and so ready to not be pregnant anymore. My husband and I just hung out in the room for a while and then at 7:40 I was checked again. I was at a 7 and was 100% effaced. As soon as she finished checking me my water broke and there was a little bit of meconium in it so they arranged to have the NICU people in the room just to make sure baby was okay right after he was born.

After about 20 minutes, I felt pressure and knew that it was about time to push, so we told the nurse and they called the doctor and got everything ready for baby to be born. My epidural was starting to wear off a little, so I felt everything stretching while he was coming out (not horribly, but it was painful). I should mention that our first two kids were born very quickly, and I only pushed for a few minutes with each of them, and I was hoping to do the same with this baby. Luckily, it only took pushing through 3 contractions before Little R was born at 8:33pm.

My husband cut the umbilical cord while I tried to breathe and catch my breath. The NICU people were in the room so they checked him out and weighed him and everything before handing him to me. He was 8lbs 7oz (my biggest baby by almost a pound), 20 1/4″ long, and was born with a full head of long, dark hair and his daddy’s chin.

We had to stay at the hospital until Tuesday because I hadn’t had the antibiotics for Group B Strep long enough before he was born, and the kids came to visit twice on Monday. They kept saying how baby brother was “so cute” and Little J just wanted to hold him the whole time. It was really special to have just the five of us there together, and it has been nice making the transition with just our little family this time.

I don’t know if it’s because I got him out quickly and only had a 1st degree tear, because by the end of pregnancy I could barely move, or because this was my third time going through childbirth, but I have recovered really quickly this time around. Physically I feel great, which is awesome because I have three kids to take care of now! My husband was able to stay home that first week and it was such a huge help. He’s been back to work for two full weeks now and things have been great! Little R is an amazing sleeper, he is putting on weight well, he is really calm and almost never cries (except for when he has gas), and we are all just so in love with him. Little J and Little A are great helpers, and they are super good at keeping each other busy when I feed Little R. Before he was born, I had heard that the transition from two to three was the hardest to go through, but so far, it has been great for us. I know that’s not how it is for everyone, but I feel extremely blessed and lucky to have three great kids and a supportive husband who helps whenever he can. Of course some days we have minor breakdowns and the adjustment hasn’t been perfect, but for the most part, we are doing great! We are all very happy that Little R is here and feel like he was definitely meant to be a part of our family. 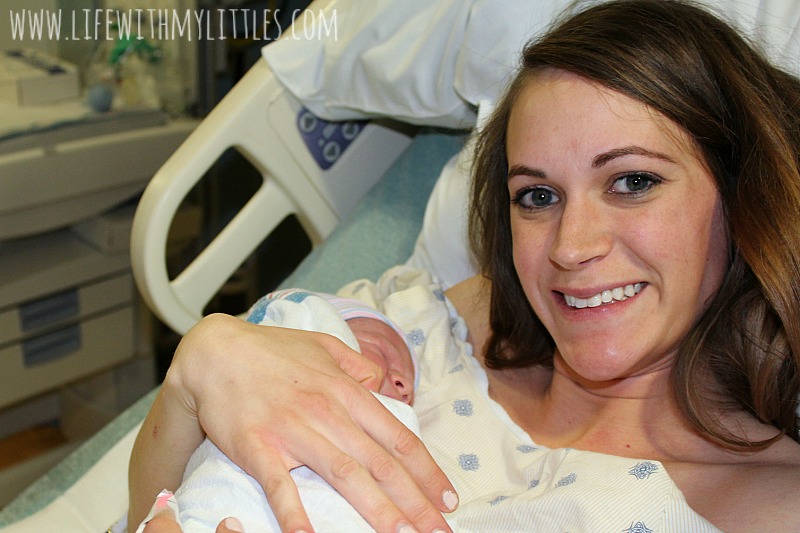