Mama Meghann Dibrell shares the C-section birth story of her son on the Honest Birth birth story series! Meghann tried for a VBAC but had to have a C-section after three hours of pushing. She shares how she made peace with her son’s birth and about her postpartum complications that resulted from a rare childbirth complication. 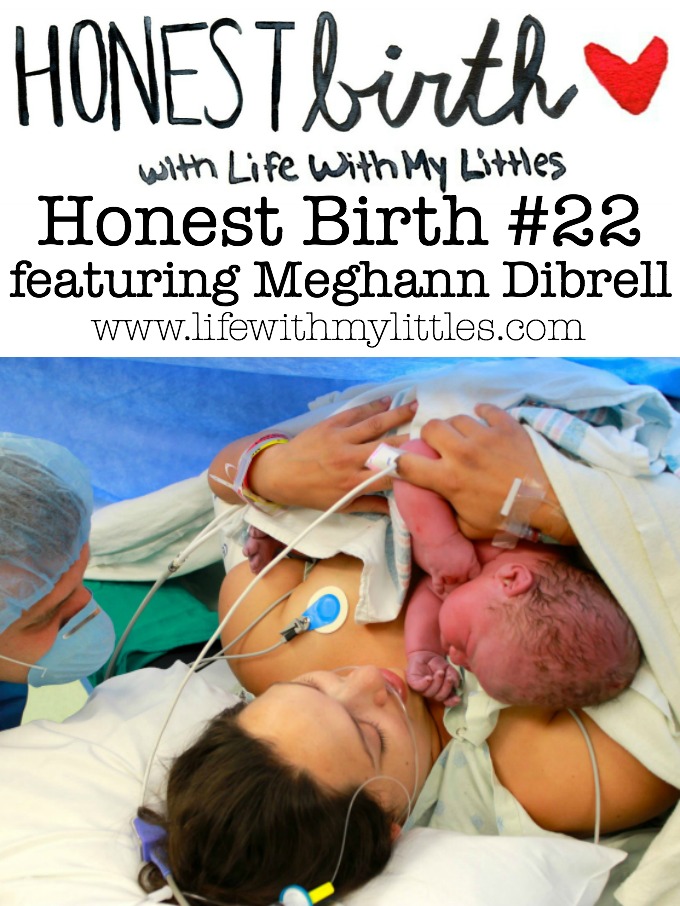 Hey mamas! Welcome to the twenty-second post in my Honest Birth series! I’m excited to share another real mama’s birth story, because I think it’s so important to share our childbirth experiences with each other. My goal with this series is to provide a place for women to share their birth stories without holding anything back, as well as compile stories for pregnant mamas to read in preparation for their own childbirth experiences. Every mama is different and every birth is different, and I believe that when we share our stories we help each other.

Today I am featuring my friend Meghann! Meghann and I follow each other on Instagram, and I’m honestly not sure who found the other first, but I love following her! This picture of her garden was actually a big inspiration to me when we were building our garden! Meghann is a wife, mother of three, writer, blogger, and proud lefty who lives in the Texas Hill Country on 6.5 acres with a large garden (again, it’s amazing), two dogs, a flock of 17 chickens, and a pet bunny! She has spent years creating a life of simplicity and joy by focusing on what matters, and establishing rhythms that allow for the greatest gifts of time and connection. Her blog, Practically Hippie, is a place where she shares simple living strategies for families along with home decor, natural living tips, and homeschool adventures. Today she’s going to be sharing the birth story of her son, Preston, as well as a complication she had postpartum while still in the hospital.

The Birth Story of Preston Dibrell

Our lives were changed in dramatic fashion after my second baby was born, and I can’t think of his birth without thinking about the pain, fear and uncertainty about my own health and his future that would follow. But despite the unexpected rollercoaster ride, my repeat Cesarean birth was surprisingly peaceful and healing.

With my first baby, I labored for 32 hours never progressing past 5 centimeters before deciding to have a Cesarean. I knew I wanted to attempt a VBAC (vaginal birth after a Cesarean) when I got pregnant again, and I made a plan to make it happen. I exercised, ate healthy, and was prepared for an unmedicated, vaginal delivery.

Several weeks of prodromal labor and false alarms left me weary going into my 39th week of pregnancy. One morning after preschool drop-off, I finally got my first sign of an impending labor—spotting.

Contractions picked up later that afternoon, and I labored at home for several more hours with my husband, mom, and doula by my side. Subconsciously I was expecting the contractions to wear off in the night again as they had done many times before, but it became pretty clear that this was the real deal.

We headed to the hospital when my contractions were a few minutes apart and I wasn’t able to joke or laugh through them anymore. I went straight back to a triage area where I waited for what felt like an eternity. Hospital policy prevented anyone from being with me and every contraction that came while I was alone, in silence, waiting on a hard hospital bed was torture. Finally, a nurse checked me, and I was eight centimeters. Good enough to earn a ticket to stay. I felt excited, relieved, and at peace. I was further along than I got in 32 hours of labor with my first baby and that felt good enough to me. I had nothing more to prove to myself or anyone else.

As soon as I entered Labor and Delivery, I begged for an epidural! It wasn’t my plan, but it’s what I really needed.

Around 3 a.m., I was ready to push. I was so excited and motivated to push my baby out. Even with the epidural, I had great control over my lower half. I could move my legs and use a squat bar to help with pushing. After almost three hours of pushing, there was little progress in bringing the baby down. Our midwife and the on-call doctor said the word I dreaded most: Cesarean.

Through the tears, I listened to my doula’s soothing voice as she told me exactly what I needed to hear. “It’s ok to cry. Let out all the tears. And then get ready to meet your baby.” I worked so hard to avoid a Cesarean, but ultimately it was the way my babies needed to enter this world. After the tears, I was ready. Although I didn’t get to push my baby out the way I expected, my son’s birth was still so beautiful.

The rest of our first day was relaxing and wonderful. Breastfeeding was a breeze, and my physical recovery was immensely easier than the first time. On the second afternoon I pushed hard to be discharged, but my doctor insisted on keeping me overnight because one of my blood counts was a tiny bit low. I wasn’t happy about it, but we had friends bring over some delicious homemade lasagna and decided to enjoy the evening.

How I wish I could go back to that moment of bliss and soak it up for a bit longer. As we sat in our hospital room, nibbling lasagna and inhaling that new baby smell, we had no idea that our lives would be turned upside down just a few hours later.

About 18 hours after the birth, I was nursing my baby and felt something snap inside my body. I was consumed with instant pain. I handed the baby to my husband and uncharacteristically told him to take the baby to the nursery.

My nurse told me that I probably had gas, and for the next few hours I made my way between the bed and the bathroom with a writhing pain in my abdomen. Around 3 am I began to realize that my problem was not gas trapped in my digestive system. My body and mind started wandering. I lost my focus and could no longer hold a conversation. What began as an intense pain was now consuming me.

During one of many trips to the bathroom, I collapsed onto the floor. One moment I was walking and the next moment all I could see were feet. So many feet. There was lots of yelling and so much commotion as nurses and doctors tried to stabilize me.

I was stable, but still in pain for several hours before my own doctor made it to the hospital. Like the many other doctors I had seen, she couldn’t find any reason for my pain. I wasn’t bleeding and didn’t have any signs of anything wrong. She wanted to wait and see how I was in a few hours before deciding how to proceed.

As my doctor walked away from my bedside, I reached out and grabbed her hand and spoke words I never imagined I’d speak. I told her I was dying and that she had to help me. Thankfully, she listened. Further tests revealed that my hemoglobin levels were incredibly low, and a CT scan showed why. I had a hematoma in my abdomen and needed emergency surgery to uncover the cause.

By this point, the pain was filling my entire body. It felt like my internal organs were being compressed by a heavy weight, and I desperately needed relief. I was rushed into surgery hanging onto life by a thread.

My doctor enlisted the help of a specialized vascular surgeon to assist on my surgery. They re-opened my Cesarean incision and eventually had to create a “T” incision to gain access to the affected area. My family had to sign consent forms for a hysterectomy, but ultimately the doctors were able to preserve my uterus.

During the surgery, I began to develop disseminated intravascular coagulation (DIC), which is a serious and potentially fatal disorder in which the proteins that control blood clotting become over active. I received 11 units of blood and plasma during the surgery to replace blood lost and combat the DIC, plus several more units before and after the surgery. I can’t quite remember all of the details about exactly how much blood I lost, but my mom remembers my doctor saying I lost twice the amount that was in my body. I am forever grateful for every kind and generous person who donated blood to save my life that day.

I suffered an asymptomatic secondary postpartum hemorrhage due to a rare complication from childbirth called a uterine artery pseudoaneurysm. Most postpartum hemorrhages present with massive amounts of vaginal bleeding, but my blood collected inside my body forming a large hematoma which is what I felt crushing my organs.

I spent four days in the intensive care unit and another week in the hospital before I was able to go home. Recovery was slow and challenging, taking more than five months to feel like I was myself again.

I’m so thankful the surgery was successful and my sweet boy was worth every ounce of suffering and distress endured during his entrance into this world. 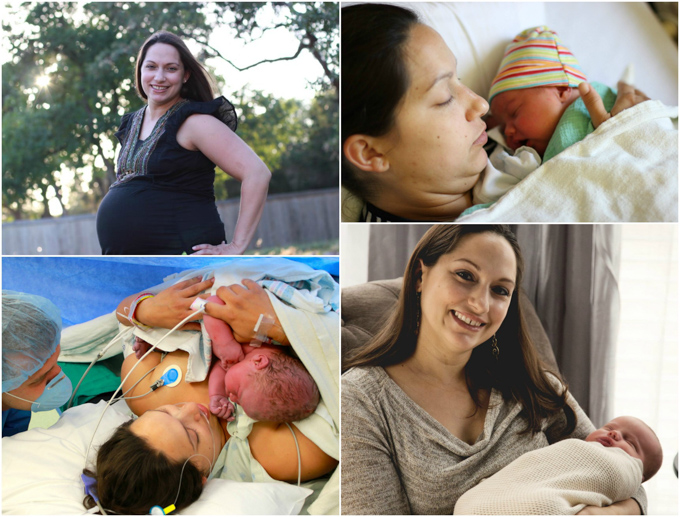 Wasn’t that great? I loved that she was able to find peace with her birth even though it wasn’t what she had planned on, and how she listened to her body and made sure to tell her nurses that something was wrong! It’s so important to stand up for yourself and be your own advocate! Make sure you check out Meghann’s blog, Practically Hippie, and follow her on Facebook, Pinterest, and Instagram. Thanks to Meghann for sharing Preston’s birth story and thanks to all of you mamas for coming to read it! Check back next month for another Honest Birth post!

« What to Expect Postpartum
Books to Give New Moms »