Mama Chelsea Johnson of Life With My Littles shares the hospital induction and epidural birth story of her first baby on the Honest Birth birth story series! Chelsea was at 1cm for several weeks before she was induced at 40 weeks 3 days and delivered her son vaginally! 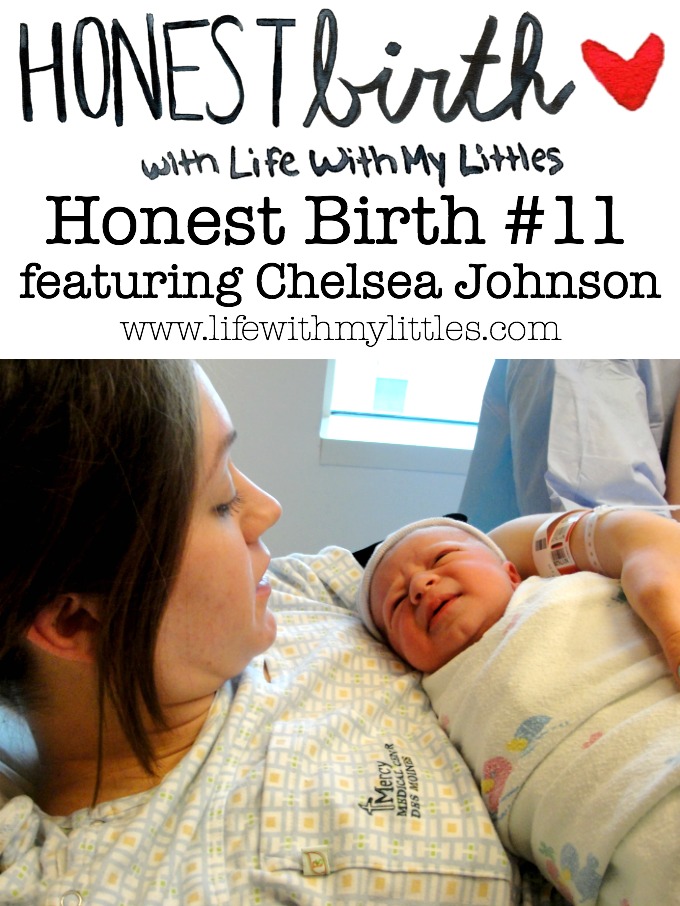 Hey mamas! Welcome to the eleventh post in my Honest Birth series! I’m excited to share another real mama’s birth story, because I think it’s so important to share our childbirth experiences with each other. My goal with this series is to provide a place for women to share their birth stories without holding anything back, as well as compile stories for pregnant mamas to read in preparation for their own childbirth experiences. Every mama is different and every birth is different, and I believe that when we share our stories we help each other.

And surprise! Today I am featuring myself! I’ve shared my daughter’s birth story on the blog, and my second son’s birth story, and I’ve talked about all three on The Birth Hour and share each story in my book, but I wanted to sit down and share it with you guys today on Honest Birth! And you guys already know me, so I’m not going to do an intro. If you are new to the blog, you can read more about me here.

Ready to read all about my first baby’s birth? Here we go!

The Birth Story of Little J

By the end of pregnancy, I was so ready to meet my baby (Doesn’t every birth story begin like that?). My husband and I were doing everything we could to try to induce labor naturally. We spent almost every night walking around the mall, and I was eating lots and lots of spicy food (and antacids).

The night I was 39 weeks, I could feel myself having contractions. They didn’t hurt at all, but I could tell my belly was tightening and they were a little more than five minutes apart (little did I know these were Braxton Hicks). We went to bed and when I woke up, I was still having them, and they were a little closer together. We grabbed all of our bags and headed to the hospital.

I was checked in and we were told that while I was having contractions, I was still 1 cm dilated (which I had been at every OB appointment). After three hours, the contractions started to go away and they sent us home telling me that when they started to hurt and I couldn’t talk or walk through them to come back.

The next few days were pretty hard because I had gotten so excited that he was going to come a bit early, and then we had been sent home. I was uncomfortable, grumpy, and just wanted to hold my baby in my arms. I kept doing things that week to try to induce labor, but nothing was working. I would have contractions on and off, but they never got strong and they always went away.

My due date came and went. I had been taking weekly pictures, but I was so grumpy about still being pregnant that I didn’t take an “official” bump picture. Then Sunday came and went, then Monday, and then we got to Tuesday. I was 40 weeks and three days and, throughout the day, my contractions started getting a little more intense. They weren’t going away, and by 3:30 p.m. I decided I was probably in early labor. I was having a hard time breathing through the contractions (or I was making myself think I was), and while I was hopeful, I tried not to be too optimistic because I didn’t want to go to the hospital and get sent home again.

That night I made dinner and was trying to do things to distract myself while still trying to get labor going. I was walking in place while reading The Hunger Games, and the contractions were progressively getting a little stronger. At this point, I wasn’t really timing them because I didn’t think they were strong enough, and it kept getting me down because they hadn’t been consistent. Around 7:30 p.m., I went to the bathroom and noticed some blood. I got excited, but it wasn’t that much, so I told my husband that if there was a little more we would call the doctor. Around 8 p.m., I went to the bathroom again and noticed quite a bit more blood, so we called the doctor and she told us to come on in and get checked out. Once again, we loaded our bags in the car and left for the hospital.

We got checked in at 8:30 p.m. and found out I hadn’t progressed and was still only 1 cm dilated. Needless to say, I was pretty frustrated. When my doctor came in, we told her that we had an appointment the next day to get a nonstress test and an ultrasound, and she said that since it was a slow night on the labor and delivery floor, and because we’d probably schedule an induction soon anyway, she would just go ahead and induce me that night. Honestly, I would’ve hugged her if I hadn’t been on the bed with the belly monitors strapped to me! We said thank you like a million times, and she said to start me on Pitocin around 11:30 p.m.

I was still having some contractions on my own, and they were getting closer, so we walked around and I drank some liquids to get things moving. Walking helped my contractions get stronger, and after a while I was having to stop because they were hurting. Looking back now, I’m 100% sure I had no idea what it meant to have a contraction truly hurt! Anyway, we went back to the room and found out that while I was still at 1 cm (gasp! I know), I was starting to get a little effaced, so that was good! We watched some basketball and then at 11:30 p.m., they came in and started me on Pitocin. The contractions weren’t unbearable, and I had always planned on getting an epidural, but after about an hour and a half they started getting really intense. I tried asking for some pain medicine, but the nurse told me that until I dilated more I couldn’t have any. She said we should make a goal that I was dilated enough to get the epidural by 7 a.m. This was around 1 a.m., so I was NOT having it. I told her that my goal was to have a baby by 7 a.m., but she told me that wasn’t very realistic.

I endured about two and a half more hours of horrible contractions that were about every minute or two and lasted a long time. I kept thinking, “Another one already?” It felt like every time one contraction would end, another would start. I was having a really hard time getting through each contraction, and while I tried to stay positive and nice, I was also unable to find relief in any position I tried. My husband was very supportive and kept asking how he could help, and I tried really hard to focus during each contraction and tell myself that I could do it.

At 3:30 a.m. I finally got some pain medication (although it wasn’t the epidural). I’m not sure what it was, but it made me feel loopy and very out of it. I was able to endure the pain better, but it was also hard to open my eyes and focus. I threw up a few times, and after an hour it wore off. I started to think that I couldn’t do it, and that I was never going to have my baby. I’m assuming I was more dilated by that point because at 4:30 a.m. I got the epidural. It was hard to sit still while I was having contractions (which I had no idea about), but once it was in it worked like a charm. I was able to relax and I felt so much better.

My husband and I both took little naps for about an hour, and when I woke up at 6 a.m., the nurses checked to see how dilated I was. I’m not sure how far I was, but they told me that they were going to start getting everything ready for our little guy! I distinctly remember after they set up the newborn station and I saw that tiny little baby diaper that would be our baby’s very first diaper, I just started bawling. Nine months is a long time to wait to meet your baby, and it was finally almost time!

I don’t know exactly what time my water broke, but I had two new nurses at that point so I’m assuming it was some time after 7 a.m. They wanted me to try to break my water on my own, so they helped me get my legs into the stirrups, and when a contraction hit, I pushed. My water popped (like literally popped) all over the older nurse’s arms. I felt bad but didn’t know if that was normal, so I was like, “I’m sure that’s not the first time that’s happened.” She looked at me and said, “Oh, it’s happened one or two times before.” Yikes. Apparently, that does not happen very often! Anyway, there was meconium in the fluid so they had the NICU team come down to check him out when he was born.

At this point we were ready to go. My epidural was perfect because I was able to feel pressure and I knew it was time to push, but I couldn’t feel any pain. I could wiggle my toes and sort of lift my right leg, and it was just enough feeling that I could have a great delivery. I think it was probably around 7:45 a.m. or so when everyone was there and it was time to push. My doctor told me to push through a contraction and I did, and there was his head! She was trying to tell me to slow down, but there was no way I was going to stop pushing that baby out. After two more contractions and pushes, Little J was born at 7:53 a.m!

Little J was crying a ton and had a short umbilical cord, so my husband cut it, and then the nurses took him to be checked out on the other side of the room while my doctor sewed me up. His birth happened so fast and I tore pretty long, but not very deep.

My husband was the first person Little J saw when he opened his eyes (which he still brags about). After they cleaned him up and weighed him, they brought him over to me so I could meet him. He was perfect, and it was so worth the long wait of trying to get pregnant and then nine months of pregnancy to have him there in my arms. He weighed 7 lb, 11 oz, and was 19 ½ inches long, and was a wonderful, easy baby. Now he’s a wonderful, energetic five year old! 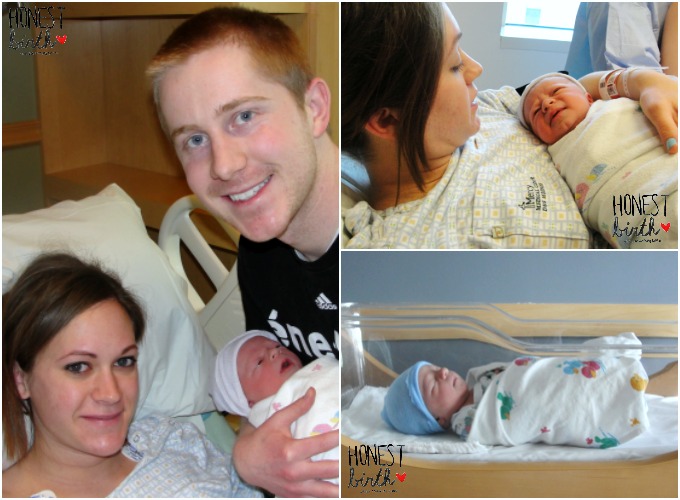 Now normally I say “wasn’t that amazing?” or something along those lines, but that sounds narcissistic. I’m also not going to thank myself for sharing, because that’s weird. But thanks to all of you mamas for coming to read it! Check back in two weeks for another Honest Birth post!

« The Best Sippy Cups for Learning How to Drink
Currently: April 2018 »