Mama Ashley Olsen shares the natural hospital birth story of her third son on the Honest Birth birth story series! Ashley labored at home, went to the hospital, and within thirty minutes, delivered her son vaginally without any medications or even an IV! 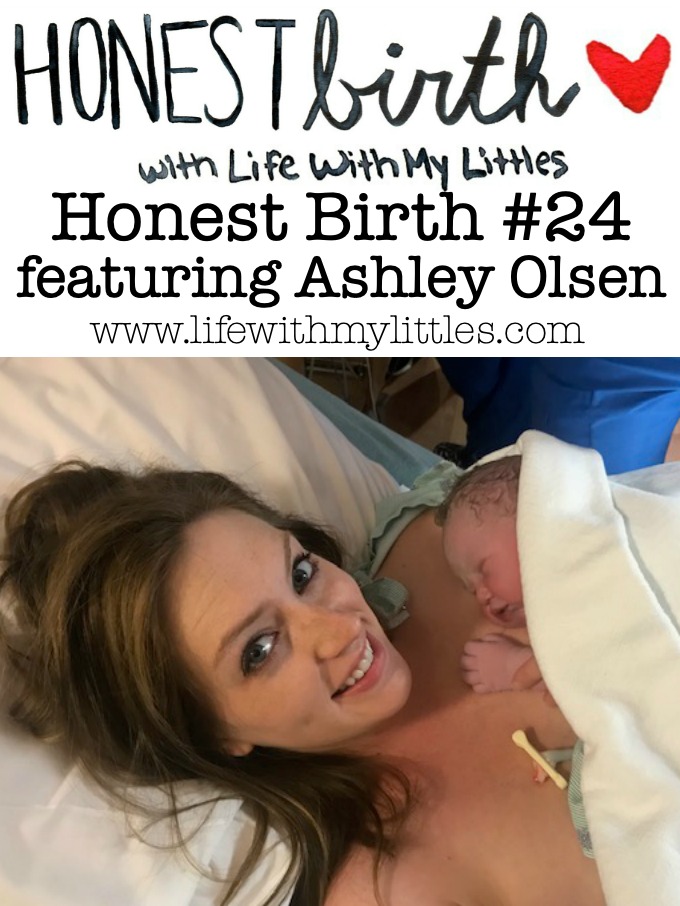 Hey mamas! Welcome to the twenty-fourth post in my Honest Birth series! I’m excited to share another real mama’s birth story, because I think it’s so important to share our childbirth experiences with each other. My goal with this series is to provide a place for women to share their birth stories without holding anything back, as well as compile stories for pregnant mamas to read in preparation for their own childbirth experiences. Every mama is different and every birth is different, and I believe that when we share our stories we help each other.

Today I am featuring my friend Ashley! We met in summer 2013 when my oldest was four or five months old and she was about to have her first baby! She and her husband Dan moved into the apartment complex we lived in, and he was about to start medical school at the school my husband had just finished his first year at. We became friends basically immediately and even though we haven’t lived in the same state for almost three years, we’ve stayed in touch and seen each other a few times since we moved away! They currently live in West Virginia where her husband is in his second year of residency. Ashley teaches dance and stays home with their three boys and 2-year-old Cairn Terrier. Today she’s going to be sharing the birth story of her third son, Dallin.

The night of June 6th through the morning of June 7th I had a hard time sleeping and started getting sick with the stomach bug. Throughout the day of the 7th I had a hard time keeping food down or wanting to eat anything until the later afternoon. I took a nap in the afternoon, and around 4:00pm I started noticing labor contractions, but thought they were just Braxton Hicks and that I was dehydrated.

Around 5:00pm I decided to start counting contractions and texted my sister-in-law Amber just in case, since she offered to watch the older boys. The contractions continued that evening, but I was able to relax through them and lie on the couch while also recovering from my sickness. Dan got the boys ready for bed and shortly after we got ready for bed as well. I had to throw up one more time and noticed I had some blood after I went to the bathroom. I went out to Dan and told him this was the real thing. After taking a shower I decided to try and go to sleep for the night around 9:00pm. For two hours I had to focus on my breathing and have Dan tickle my lower back as I had back labor again.

I got out of bed a little after 11:00pm to finish packing my hospital bag and put some makeup on. I thought about taking a shower to relax more, but my contractions were getting closer, so, I decided we should go to the hospital. I called Amber to come over and stay with the boys, and called my midwife to let them know we were leaving the house. From the short time Amber came over, and Dan and I walked to the car, my contractions were very close and I felt the urge to go to the bathroom,  but decided to wait until we got to the hospital.

The hospital was about 7 minutes away and I had a few intense contractions during the drive. We got to the hospital a little after midnight. Dan parked in the 15 minute parking lot, since it was the closest to the door. We walked to the triage room and they said it was going to be a few minutes. I started feeling pushing pressure and told Dan that he needed to tell them that they need to get me in the room now. They let me in the room but Dan wasn’t allowed in. The nurse told Dan that it would be a while and that Dan should go move the car. I tried to change my clothes into the gown while having contractions and got on the bed for them to evaluate me. I wasn’t acting like myself and walking very slowly and whining to tell them to let Dan in the room. My contractions were strong enough at that point that I had a hard time focusing on my breathing and started making groaning noises and gently pushing. While I wanted to breathe through everything calmly, I got to the point where it became difficult, but I did what felt good to me and my body. The nurse checked me and said almost in a panic, “Call Sandy, she’s fully ready.”

They started wheeling me on the bed into my room, and while I was wondering where Dan was, the nurse said he went to move the car. They got me into the room and told me I had to switch beds. I knew that the baby was crowning at this point and told everyone that, but no one said anything. I don’t think anyone realized how close I actually was, and I didn’t feel I was being taken very seriously, regardless of my weird moans and groans. I rolled onto the other bed and had a few contractions on my hands and knees and decided to finish changing into the gown. They tried once to get the IV in my hand but it didn’t work out. Everything happened so fast that I didn’t end up getting an IV, or the monitor on my belly. My midwife still wasn’t there at this point. I wanted to birth on my side and thought I still had a good amount of time to push. I turned on my side, had a couple of
contractions and felt my water break. A nurse said that the baby’s head was out and I just needed to push one more time to get the rest of the body out. Suddenly the nurse got closer and a resident OB/GYN was there to deliver the baby. I was surprised that he was out so soon and didn’t feel his head come out since I felt my water break instead. I gently started pushing and worked with my next contraction to get his body out. He was born at 12:30am on June 8th . They placed him on my chest and then my midwife, Sandy finally arrived. Dan cut the cord (he caught up with us in the hallway before we got to the room) after it stopped pulsing. I had a small first degree tear that Sandy stitched up. We had the name Dallin picked out throughout the whole pregnancy and decided to name him that. Dallin stayed on my chest for some time, and while Sandy was finishing some stitches on me I had them weigh Dallin (he was 8 lbs 3 oz. and 20.75 inches) . He had low blood sugar and they had me try to feed him right away. They had to check him a couple of times throughout our hospital stay, but after his first feeding his levels went up fine.

I felt that after Dallin was born it was all very surreal since it happened so fast. I was expecting to have to focus on pushing for a while, since I had to with my other two boys. I enjoyed this time around since my body was able to push him out without me forcing it. The gentle pushes I did were more of me just doing what I thought felt good. Things happened quickly, and miraculously I had some energy while in labor, even though I was so sick that day. Dallin came out so quickly that he didn’t have any marks. I was able to have my second unmediated birth, and labor at home for majority of it. I used Hypnobirthing techniques during labor. I felt that Dallin and I had a good and fast birthing experience and I am grateful it went so well! 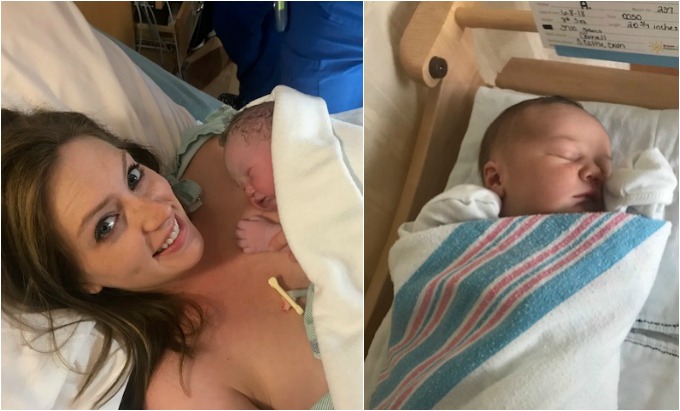 Wasn’t that amazing? Every time I read that I’m just like “you’re a boss, girl!” I can’t imagine having a baby so quickly without any pain meds and only having a first degree tear! If you want to reach out to Ashley, you can find her on Facebook here. Thanks to Ashley for sharing Dallin’s birth story and thanks to all of you mamas for coming to read it! Check back in February for the next Honest Birth post!

« You Have Permission
Currently: December 2018 »