When you have small kids, it can be stressful to move! Here are 14 helpful moving tips to make packing and moving your family easy!

Last weekend we moved from Iowa, across Nebraska and Wyoming, all the way to Idaho. It was a long trip and a long drive to make driving separately, but we made it! We listened to podcasts and then talked about them when we met up, and the kids were fantastic! We only had a slight mishap with our car that my husband was towing behind the moving truck, but nobody was hurt and it’s getting fixed now!

Anyway since my husband is busy doing his rotations for medical school right now, he wasn’t able to help much with packing up our home. And when you have a toddler and a baby to take care of, it can be stressful and hard to get ready! I planned ahead to make sure that packing and moving wouldn’t be too stressful, and I thought it would be helpful to share some tips that I learned from personal experience and from friends!

1. Start packing early. If you won’t be able to devote a lot of time to packing right before you move, you will want to start early and do a little bit each day over a few weeks. Since the Mister had scheduled rotations right up until the day we moved, I was pretty much in charge of getting things organized and packed so we would be ready to move. I packed a few boxes four weeks before we moved, and after my son’s birthday party was over, I put more of my time into packing. But the point is, if you won’t have a lot of time to pack right before you move, starting early is the best way to stay organized and not feel rushed at the end.

2. Take down frames and decorations first. These aren’t essential to every day life, and they are easy to get packed up first. Yes, your house will be ugly for a few weeks, but it’s fine and you will get over it.

3. Pack books early. Chances are, you aren’t going to be reading all of your books right before you move. So one thing I packed early were our books from our bookshelves. I left a few of Little J’s books out, but most of the books got packed a few weeks before we moved.

5. Collect boxes in the weeks leading up to your move. We started collecting boxes about two months before we moved. I told friends we were moving and asked if they would send any boxes our way, too. It helped SO MUCH and we didn’t have a hard time getting enough boxes for our move (which was something we struggled with when we moved to Iowa). And keep diaper boxes because the handles and sturdiness of those boxes are super handy! 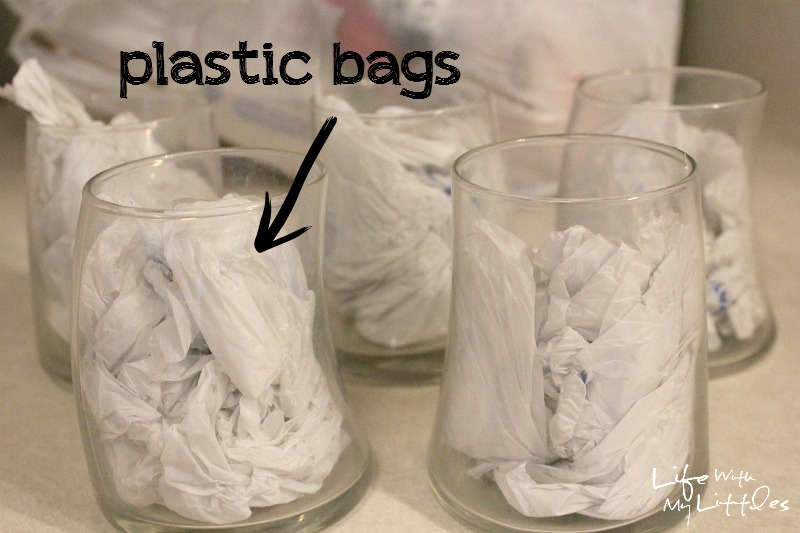 6. Use plastic grocery bags for stuffing around breakable or fragile things. Instead of spending money on bubble wrap or spreading your socks and towels throughout 20 different boxes, save your plastic grocery bags and use those for stuffing around your plates and glasses and anything else fragile. It works super well and you are reusing those bags!

7. Pack dishes a few days before you move, and use paper plates and cups until the move. We happened to have a bunch of leftover plates, napkins, forks, and cups from Little J’s birthday party, so it was really helpful when we had packed our dishes away. We didn’t have to worry about packing them last-minute, and I was able to pack them all together so nothing got misplaced.

9. Use food in your pantry, refrigerator, or freezer in the weeks leading up to your move. Since we were moving across several states, we weren’t going to be able to save any food from the fridge or freezer like we would have if we had moved across town. So I made sure we ate any freezer meals, frozen meat, and refrigerated items before we moved (as much as we could, at least). I also tried to use up things like cereal, pasta, or anything else that is perishable and not considered a “canned good.” You can obviously pack and move your spices and things like that, but try and use anything you can so that you aren’t throwing away a bunch of food when you move. 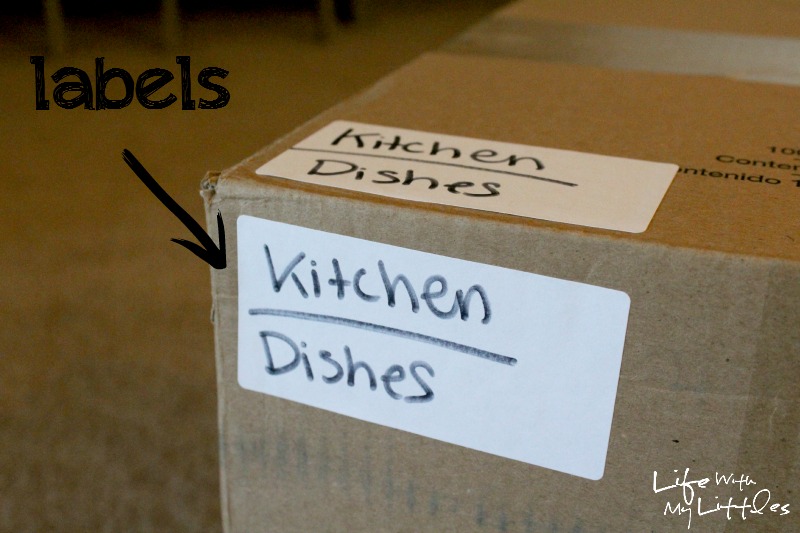 11. Put labels on all of your boxes. I used white labels on all of my boxes and I put them all in the same place so I knew where to look for things. I put a label on the front, upper-left corner, and one on the top, bottom-right corner. That way I had a label so people carrying the box to read (by looking down) and one to read when the boxes were all stacked. And making them look the same was important, too! Plus, it helps when you are unpacking so you know where everything is! This was a huge problem I had last time we moved!

12. Pack a few changes of clothes and toiletries in a suitcase for everyone. It doesn’t matter if you aren’t stopping to stay the night somewhere, if you have a suitcase with clothes, you won’t be pressured to unpack all of your clothes and bathroom things once you get to your new house. And if you do spend the night somewhere on your way to your new home, you will have just one bag to grab with everything in it. 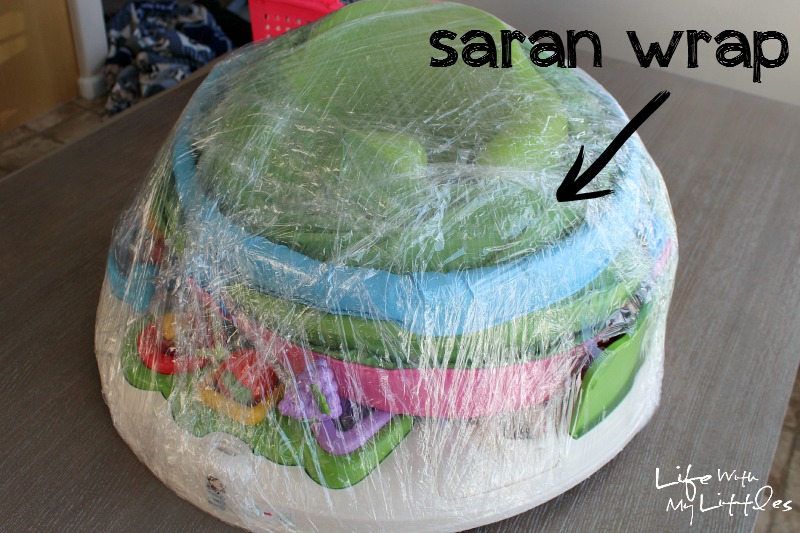 13. Use saran wrap for big, awkward items. Some things that kids have are really weird and awkward shaped and don’t fit nicely into boxes. For example, the top of my daughter’s jumper. Instead of stressing over it getting dirty or broken in the move, I wrapped it (along with the Bumbo and a tunnel for my son’s tent) with some of that big packing saran wrap that comes on a roll. It was so nice to just be able to wrap it and keep it safe and sound. I also used the saran wrap for my son’s basketball hoop. It’s an inside toy so I wanted to protect it!

14. Set up utilities for your new home before you move. If you can, call ahead and put things like power and gas in your name starting the day you move in. That way you won’t have a bunch of things to do while you are trying to get your new home settled, and you won’t forget either!

I hope these tips help you guys out! Packing and moving with kids can be stressful and a pain, but it doesn’t have to be that bad! Preparation, organization, and patience is definitely important! And doing all of these things help a ton when you are unpacking, too!

« Being a Mother Is…
How to Easily Remove Poopout Stains »