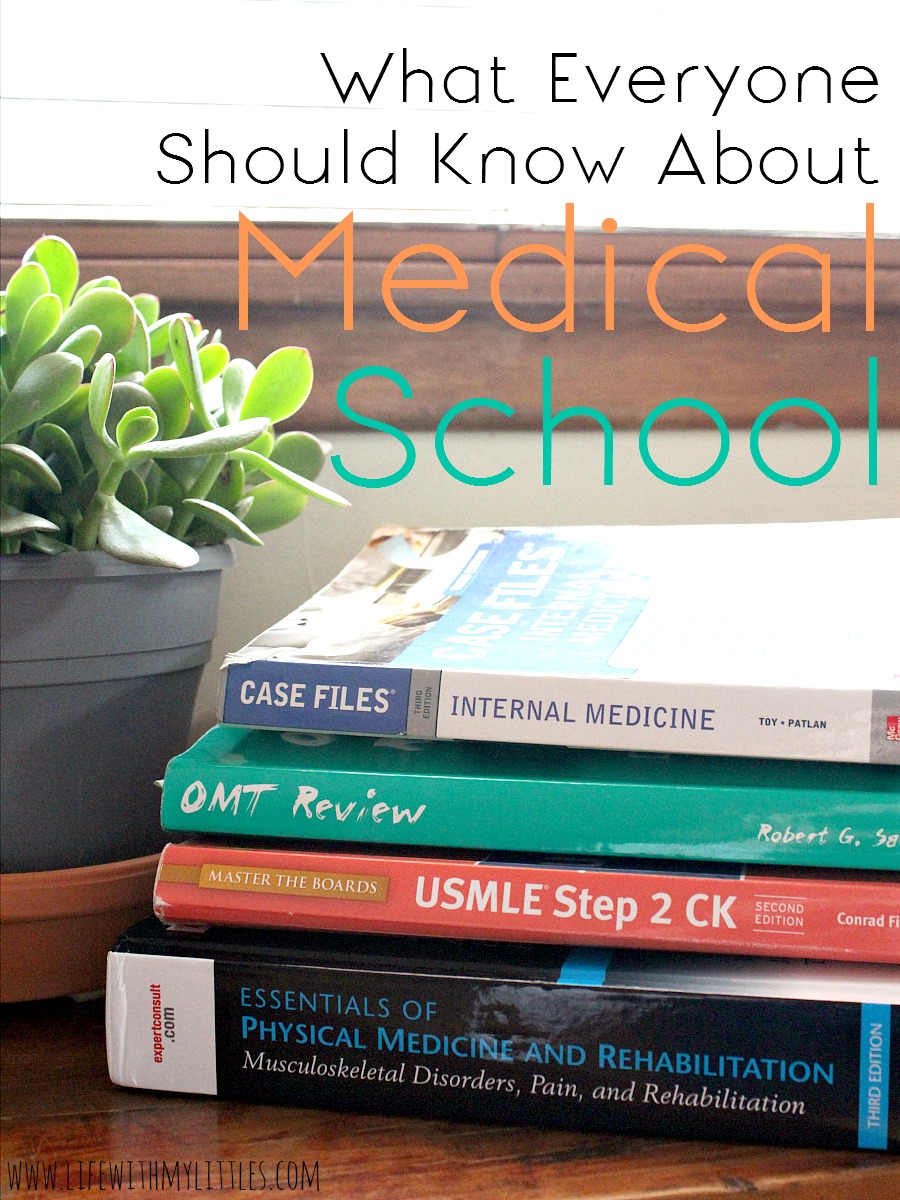 In just four short months, I will be married to a doctor.

What?! It seriously blows my mind. Medical school has been a long journey, and the last four years have been a challenge. There are a lot of things I had no idea about before my husband was accepted to medical school, and it would’ve been helpful as a med school wife to have known these things. Not only that, but I think it would be helpful for everyone to know a few thing about medical school. Because there are a lot of things you might not know.

1. There are two types of medical degrees–a D.O. and an M.D. Both are doctors, and honestly it doesn’t matter if you’re seeing a D.O. or an M.D. The only difference is that D.O.s learn O.M.M., which is an additional way to treat. But they don’t HAVE to use it in their practice and some choose not to (or it’s not really relevant to what they are doing). I’m guessing you probably had no idea about this one. And don’t worry. Neither degree is better than the other. They are both smart and good doctors.

2. Medical school is four years long. And it’s a lot of work. And after those four years of school, guess what? Doctors get to do a residency that can be between 3-5 additional years of training. And then they might choose to do a fellowship, which is another extra year of training. It’s exhausting. My husband won’t be done (if he chooses not to do a fellowship) until he is 31. And a lot of doctors are older than that when they’re completely finished with their training.

3. Rotations are different than residency. You may have heard the terms “rotations” and “residency” before and wondered what the difference is. Rotations are usually month-long and they are done in all different kinds of specialties. They are done in the third and fourth year of medical school, and sometimes they can be done out of town from where you went to school. For example, my husband has done three out-of-town rotations (aka, three months away from home) in his fourth year. Residency is the training after graduation where you are officially a doctor, but you are learning more about your specialty. So if a student decides to specialize in surgery, after he graduates, he does his residency in surgery and learns all he can about surgery and different procedures and operations. Unlike rotations, residency is a paid job.

5. Medical students can’t have part-time jobs while they are going to school. During college it’s perfectly normal for a student to have a job outside of school to make money to pay for school. That is not the case during medical school. The first two years medical students go to class all day Monday-Friday, then come home and have to study several hours before going to bed. Then during the second two years when students have rotations, they are on the doctor’s schedule that is teaching them. Sometimes this can be 8-5, and sometimes it can be nights or even some of both. Plus you have to study. My husband told me that he has worked probably 70-80 hours a week for the last four years. Of course some weeks will be less and some more, but there’s no way that a medical student can have a job outside of school. Don’t assume they’re being lazy because they don’t have a job, because I promise you that’s not why.

6. Medical students get the same amount of loan money whether they are single or have a wife and two kids. This sucks. And it also means that medical students who have families are kind of poor. There are programs that can help, but definitely don’t think that medical students (or even residents for that matter) are rich. We aren’t. Luckily I’m able to make some money with my blog, and I know a lot of other med school wives who have little side jobs or Etsy shops, because every year of medical school gets more expensive and sometimes you get super close to running out of loan money before the next reimbursement comes in. There are definitely pluses to having a wife in school (she does your laundry and cooks for you), but it also means the money has to stretch a little farther.

7. Don’t ask a med student what specialty they are going to do in their first or second year of school. As soon as people find out that my husband is in medical school, they always ask the same question. “What does he want to specialize in?” This is fine now that we are in the last few months of medical school, but at the beginning (or even up until last year) I never really knew how to answer. And the answer has changed several times, too. So even though I finally know what my husband is going to specialize in, I don’t think that should be anyone’s first question when they ask about medical school.

8. Medical students don’t completely pick where they are going for residency. Unlike applying for medical school where you can get accepted multiple places and decide where you want to go (or any other job, for that matter), residency is a lot more complicated. Meet The Match. The Match is where a computer generated algorithm places candidates and programs together for residency. Basically, you have to interview at a ton of different programs and then rank your top choices, hoping that they liked you and will rank you high, too. Then on Match Day, the results are released and you find out where you have been hired for the next 3-5 years. It’s definitely stressful not knowing where you have to move until two months before graduation, but there’s not really anything you can do about it. So just relax and have faith that you’ll end up where you’re supposed to (that’s my plan, at least!).

9.  What are board exams? Oh the boards. There are three steps to the board exams, and the first two are taken during medical school. They require an insane amount of studying, and they are the most important thing for determining where you can go for residency. There are a lot of amazing residency programs, but if you want to get interviews at the most competitive and best ones, you have to get high board scores.

10. One huge misconception people make about medical school is that you must be doing it for the money. Like I said, medical students are not rich, and residents aren’t rich either. Once you do start getting paid, it’s significantly less than what doctors out of residency get paid, and you have to start paying back your loans (which, by the end of school, will total close to ___. Obviously you can’t pay that all back at once, and there are different ways to do it, but you should not go to medical school for the money. It takes a long time to finally be out of debt (we know several doctors who have been out of residency for over 15 years who still aren’t out of debt), and it’s a long journey even after you’re done with residency. So no, my husband is not going to be a doctor for the money.

Medical school is not like Scrubs or Grey’s Anatomy. Most cases are not unique or interesting, and the majority of people have diabetes, hypertension, or back pain. It’s a long journey, it’s hard work, and if you do choose to go to medical school, you’re going to be exposed to a lot of different specialties, and some of them, you will absolutely hate. So if you want to help people and make a difference, medical school might be for you. But it takes two years of in-class work, two years of rotations, and 3-5 years of residency until you’ll finally be on your own and able to open your own practice.