8 Things You Can Blame on Pregnancy: a funny look at the weird things that happen to your pregnant body that you just can’t control! 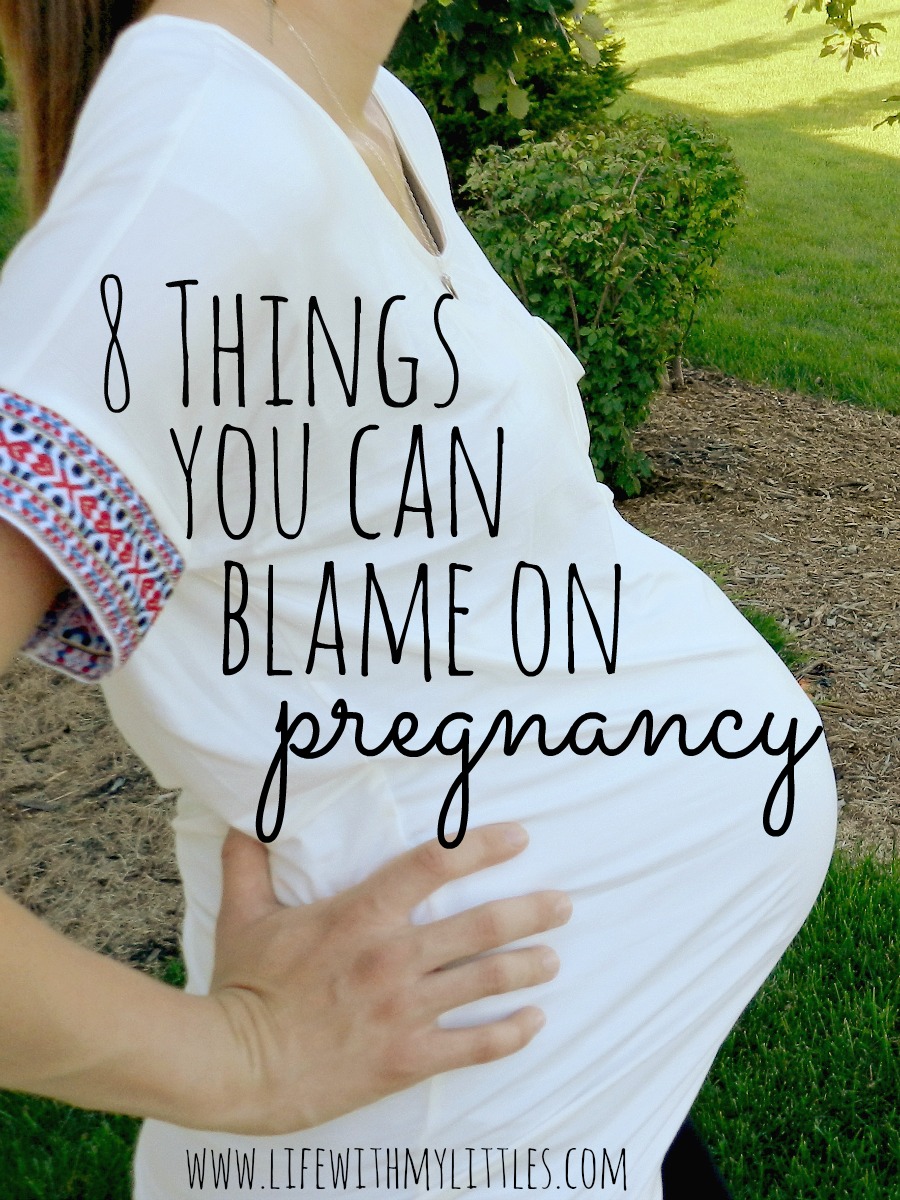 Pregnancy is the ultimate excuse. There have been instances where my husband has told me he doesn’t like when I’m pregnant because I seriously blame everything on pregnancy. But to be fair, making a baby is hard and it does a lot of weird and difficult stuff to your body. Sometimes when you are pregnant, there are things you just can’t control, and you can always blame those things on being pregnant. Here are 8 things I have definitely blamed on pregnancy:

1. Cravings. I’m not talking about “oh, I really want pizza” cravings here. I’m talking about wanting pizza so bad that it’s all you can talk about and all you can think about. You want it so bad that until you get that specific food, you will not be satisfied. There were several times that I had to bribe the Mister to go get something for me because I wanted it so bad. Like Pizza Hut Breadsticks with Cheese. Those things get me during pregnancy. And lucky for you, you can just be like “I’m pregnant!” and then it justifies your cravings and people usually feel sympathetic enough to go get it for you.

2. Wanting to eat all the time. Since you are growing a human, you are going to need about 300 extra calories per day. But somehow that translates into wanting to eat ALL THE TIME. And also wanting to eat at weird times. It’s 3 am? Your body doesn’t care if you are sleeping, it wants food now. But just blame it on pregnancy and people will excuse your giant appetite.

4. Nausea. If you tell someone you feel sick and then follow that up with “I’m pregnant,” they’ll be like “ohhh, I’m so sorry! Is there anything I can do?” Which there probably isn’t, but if you tell someone you are nauseous because you are pregnant, they will definitely understand. Sometimes it’s all you can do to just sit and try not to think about how sick you feel, and it sucks. So yes, just blame it on pregnancy.

5. Sleeping a lot. I don’t mean getting a good solid 8 hours. I mean sleeping 10 hours during the night, and then napping at random times throughout the day. When I was pregnant with my daughter I caught myself falling asleep and waking up while I was just sitting and watching my son play. I would just blame it on pregnancy and it made me feel at least a little bit better. And when your husband complains that you want to go to bed at 9pm, just blame it on pregnancy and tell him good night.

6. Laziness. Is the TV remote out of your reach? Well when you are pregnant, sometimes that is too far. You are either too nauseous to move, too sore to move, or you have sunk too deep into your couch to be able to get up and get it yourself. So while some people might call it laziness, you know better. It’s because of pregnancy.

7. Soreness. You get to a point in pregnancy where your whole body hurts. Your ribs are killing you, it hurts to walk because your hips are being stretched out, your lower back hurts, and even your feet feel like you’ve walked a million miles. Having a human in your belly makes your body stretch and of course that is going to make things a bit painful. Hence, the famous pregnancy waddle. But if someone dares to say “toughen up” when you say “ow” to standing up, just blame it on pregnancy.

8. Peeing all the time. In the first trimester, you are peeing all the time because hormonal changes fill your bladder more often, not to mention the 50% increase in blood leads to extra fluid being processed in your kidneys, and hence, having to pee more. And then in the third trimester your baby is pushing right on that bladder, making you have to pee more. Good luck going on a road trip when you are pregnant because you are going to be stopping all the time, even if you aren’t drinking a lot (which you still should, because you’re pregnant). So when your family or friends sigh and say “again?” when you get up, just blame it on pregnancy.

Lots of crazy things happen to your pregnant body that you can’t control, but luckily, you can just tell people “it’s because I’m pregnant” and they’ll hopefully understand. Being pregnant can be hard, but it’s so worth it in the end. So enjoy using that excuse, because in less than 40 weeks, you won’t be able to blame that midnight run to Taco Bell on pregnancy.