Becoming a parent changes you. Priorities shift, you get soft, and you let go of things that aren’t essential. And before you know it, you’re doing things you said you’d never do. 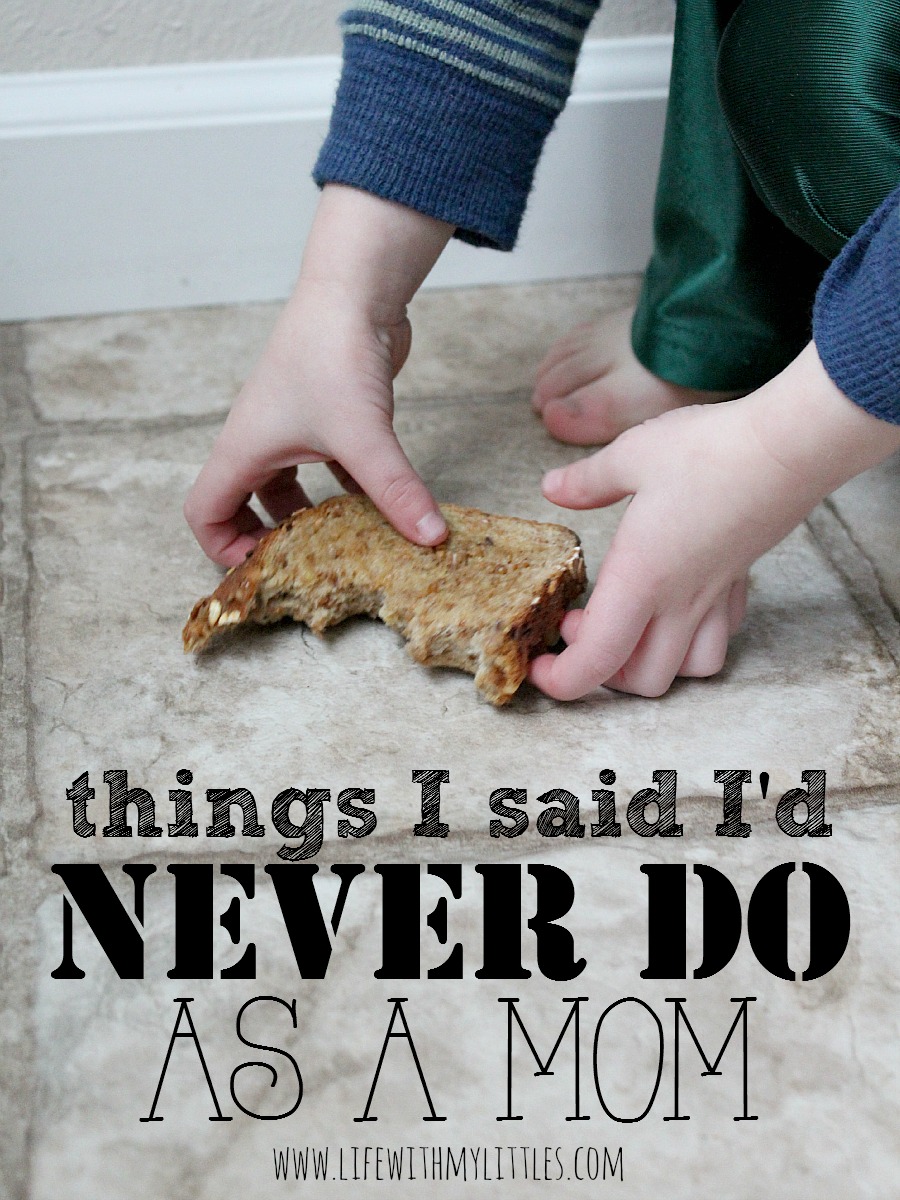 Ten years later, I had two kids and was planning on having more in the future.

Becoming a parent changes you. Priorities shift, you get soft, and you let go of things that aren’t essential. And before you know it, you’re doing things you said you’d never do.

I said I’d never have a minivan. But last year our Pilot got totaled and we upgraded to an Odyssey. And man, it is the best. Automatic doors, window shades, and a 6-CD changer (so I don’t only have to listen to the Frozen soundtrack) changed my life. Not to mention there is SO MUCH SPACE in that thing. I have my double stroller and my umbrella stroller in the trunk, and I can pack in a week’s worth of groceries and diapers without even putting my third row of seats down. Mommy luxury. I’m riding in style.

I said I would never let my kids watch TV. I took a class in college about how the media affects kids, and I vowed my kids would never watch TV. Then I became a parent and realized that sometimes the only way I can cook dinner or shower is if the TV is on. No mommy guilt here.

I said I would never let my kids eat dirt. But sometimes I’m not fast enough, and bonus, it’s organic!

I said I would never sing to my kids. I always hated singing (thanks to a falling-off-the-risers-incident) and I didn’t want my kids to get into choir. Sitting through hours of my sister’s choir concerts growing up was enough for me. But when your baby is crying in your arms, sometimes all you can do is start singing. And you don’t stop. You sing lullabies, hymns, nursery rhymes, and TV theme songs. They get stuck in your head, and you sing them even when your kids aren’t around. And when your kids start singing them back to you, your heart melts and you give in to the music.

I said I would never let my kids get super messy at mealtime. The first time I tried to feed our son baby food I instantly gave up on that one.

I said I would never let my kids eat junk food. Now, I’m not even sure what made that idea come into my head. I can’t even go a day without eating dessert. And I’m certainly not going to deprive my kids of enjoying my favorite sugary treats, too. They’re only kids once, and as long as they have a balanced diet, I’m going to let them have treats when they’re good.

I said I would never let my kids cry in public. Let’s dissect that phrase, shall we? You don’t “let” a kid cry. In most cases, they just do it. And sometimes, there’s absolutely nothing you can do but try and get out of Walmart as fast as possible.

I said I would never let my kids use an iPhone at a restaurant. I vividly remember the first time my son was ever bad at a restaurant. He wouldn’t sit still, he was screaming while we were waiting for our food, and there were tons of people around. Then we figured out a magical way to get him to sit still so we could actually eat our food: the iPhone. As awful as it sounds, when you have no other choice, it’s the solution to getting to eat your food while it’s hot.

I said I would never let my kids have their pacifier, bottle, or sippy cup after it fell on the floor. Yeah, right. We all know that a quick sleeve wipe erases all germs.

I said I would never let my kids play with an iPad. Then my second baby was born and I was faced with trying to find something for my son to do while I nursed her several times a day. So I found some educational apps and I was able to relax knowing he wasn’t destroying the house or getting hurt while I was breastfeeding.

I said I would never let my kids eat food off the floor. Five second rule, am I right?

I said I would never let my kids go out in public with food on their faces. But when you have mommy brain and you keep getting distracted by ten other things you have to do before you leave the house and the wipe is not already in your hand, sometimes you forget. But at least they all have clothes on.

I said I would never change my kids’ diapers on the floor. I thought I would always use the changing pad. But when your two-year-old refuses to use the potty and he doesn’t fit on the changing pad anymore, you learn to relax and just put a blanket down.

I said I would never let my kids wear a leash. Okay, so I still haven’t done this one, but after chasing a toddler around the store while carrying my daughter on my hip multiple times, I totally think it’s justified. I will never judge another parent straining against a leash with a toddler at the end. I get it now.

Who knows what I’m going to let my kids do in the next ten years.