A great post about why it’s okay to stop breastfeeding, why you shouldn’t feel guilty, and why it’s your decision whether to breastfeed your baby or not. 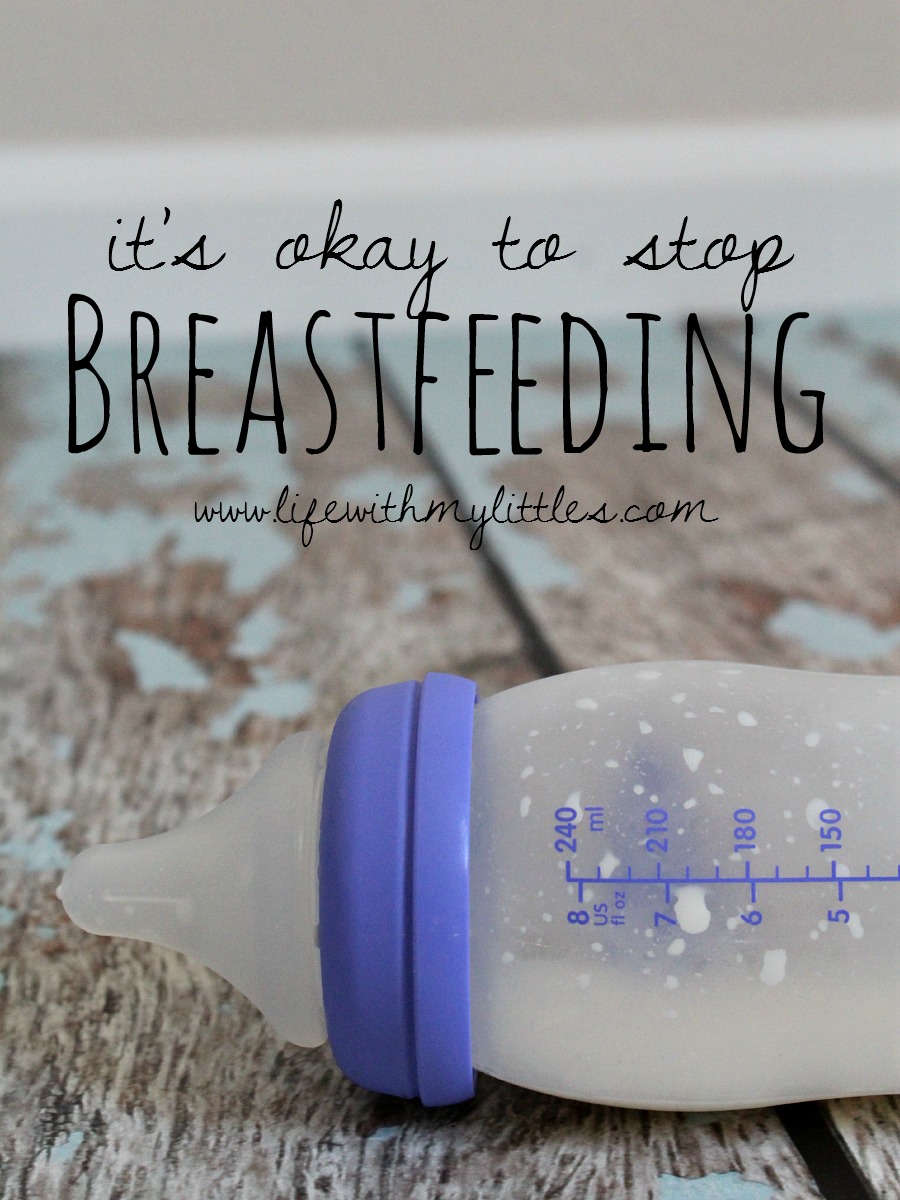 Before my son was born, I made the decision that I was going to breastfeed. I knew it was what was best for him, and I wanted to give him the best start I could. I originally planned on breastfeeding him until he was at least one-year-old, but in the end, I only breastfed him until he was eight-months-old. I just wasn’t making enough milk, and when we started supplementing with formula, he just sort of weaned himself off.

With my daughter, I wanted to try and breastfeed her to a year, too. But between her checkups at four and six months, we found out she just wasn’t gaining enough weight. We decided to supplement with formula so she would grow, and then after she figured out the bottle, she refused to breastfeed anymore.

I’m sure you’ve noticed that right now there is a huge push to normalize breastfeeding and to make sure every woman knows that breastfeeding is the best way to feed your baby. I feel like some women get pressured into breastfeeding, and then when it’s not all sunshine and butterflies, they feel super guilty and like they are doing something wrong. Yes, we should support women who breastfeed, but shouldn’t we be supporting women who don’t, too?

Some women, for a variety of reasons, just can’t breastfeed. Some women don’t make enough milk, some women suffer through a lot of physical pain trying to breastfeed their baby,  some babies end up being intolerant of their mother’s milk because of food allergies, and some women work and pumping is just too much for them (which I’m with you, pumping is the worst). THAT IS OKAY.

I have had multiple friends tell me that they felt extremely pressured to continue breastfeeding even though it was incredibly difficult and painful for them. It can be frustrating and emotional when your baby doesn’t want to breastfeed. And if your baby isn’t getting enough to eat from you, it might be too much of a stress to try and do every possible thing to try to increase your milk supply. Sometimes, it just doesn’t work. And you shouldn’t feel bad about that.

If your baby screams and screams every time you try to breastfeed him, don’t feel like you are a bad mother for stopping and switching to formula. It’s okay to stop breastfeeding.

If you have been breastfeeding for a few weeks and it still hurts after trying different positions and using multiple tubes of lanolin, it’s okay to stop breastfeeding.

You are definitely not a wimp for quitting breastfeeding. On the contrary, I think it takes someone very strong to realize what is best for them and their baby.

I know that some people are completely against formula, and I know that I probably will get people telling me I’m wrong for writing this. But someone has to say it. Yes, I am going to try and breastfeed my children as long as possible, but if something is wrong or if it’s not going the way it needs to, it’s okay to switch to formula. What’s not okay is looking down on people who give their babies formula. We have no right to judge other women for their mothering decisions.

Formula has been used for a long time and a lot of people have been solely formula-fed. In the 40s and 50s babies were primarily formula-fed, and they accomplished a lot and grew up to do a lot of pretty awesome things. Formula feeding your baby is not going to limit their potential, I promise.

I used to feel like I had to explain to people why I stopped breastfeeding my babies before they were one-year-old. I don’t anymore. Because it’s okay to stop breastfeeding. Formula exists for a reason, and it’s made so babies can still get the nutrients they need. Yes, there are benefits to both, and people might still give you the evil eye for pulling a bottle of formula out of your bag.

But guess what? They don’t know you, and it’s your decision.