How to Survive Your Husband’s Second Year of Medical School: Tips to help you both get through his second year written by a med school wife! 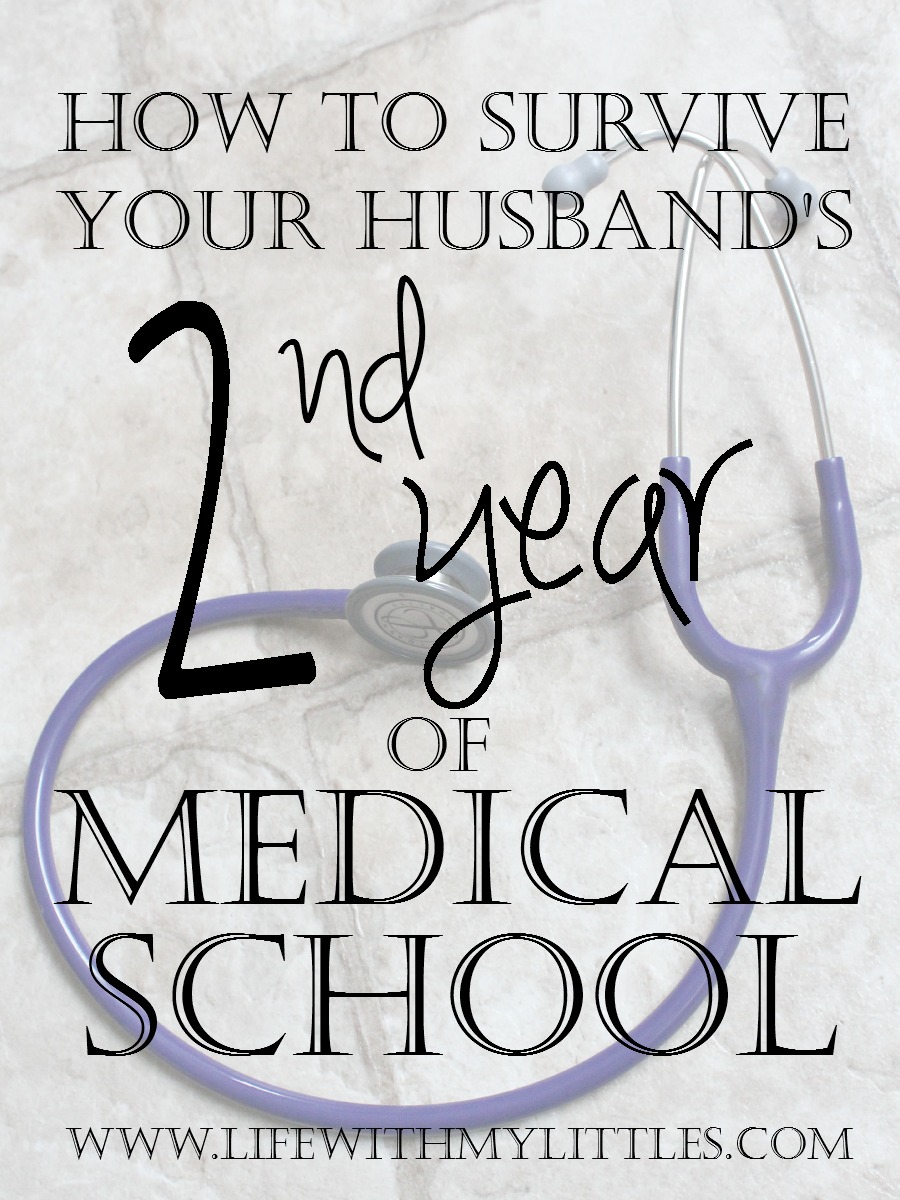 1. Listen to him. Yes, it can be hard to listen to your husband tell you what he learned at school that day. Mostly always it goes right over my head. But if your husband is anything like the Mister, he studies by himself almost all day every day, so when he gets home and wants to talk, you need to listen. And I don’t mean half-listening while you are playing a game or thinking of other things. You need to really listen to him and give good feedback. Because not only is that just part of being a good wife, it is also just a good thing to do in any relationship. And sometimes husbands just need to vent about how hard a test was or how they don’t understand something. And if you really listen to him, that will count and help him feel better.

2. Have a regular date night. And it doesn’t always have to be just the two of you, either. Six nights a week I make dinner at home, and then usually on Fridays, we go out to dinner. We bring Little J with us, but it is really nice to be able to get out of the house and go do something special. I think for the Mister, it is sometimes something he looks forward to the whole week (especially if we are going to one of our favorite restaurants). And when you can, leave the kids at home and take time for just the two of you. We haven’t done that very often but when we do, it is so worth it and makes a big difference.

3. Visit him at school. When your husband is a second year, he is busy. That sometimes means that he leaves for school at 7 in the morning and doesn’t get home until 6 at night for dinner. Basically, you don’t get to see him very much during the week. So take time to visit him at school. You can go have lunch with him, surprise him with a special treat, or even just stop by and say hi for a few minutes. I promise that even a few minutes will mean a lot. I wouldn’t recommend doing that every day because it can be hard for husbands to study when they are interrupted by you actually being there, but once a week is a good routine to get into for visiting your husband at school.

4. Be involved with helping him choose his top rotation spots. This is a big deal because it determines where you will go live for the next two years. At the Mister’s school, you rank your top 6 spots, and only 2 of the spots meant we would stay where we are for sure. So that meant we had to seriously consider where we would actually be okay with moving, and what the pros and cons of each rotation spot were. Seriously, this is a big deal so make it a priority when you are trying to figure out where you want to go (or stay). Look at location, the hospital/clinics he would be rotating at, how many spots are there, and how many residents are there. All of these things played a big part in how we chose the spots we wanted and what we ranked them as. It can be a stressful thing, so it’s nice for you to help him out (and that way you won’t be surprised if you end up having to move).

5. Help him study. This pretty much means be his patient and quiz him if he asks. I rarely (if ever) quizzed the Mister because I would always pronounce things wrong or ask bad questions. But when they are practicing for tests where they have to go and diagnose a pretend patient, it really helps for them to go through the motions with a person so they know how long things take and so they can get a feel for doing each test required. Every time my husband had one of these tests we would study together multiple times until he took the test. And it really did help him prepare because he was familiar with the procedures and format and everything. So try and help him study in any way that you can (and that he will let you). It can really pay off and it will give you more time with him when he has an upcoming test!

6. Know his test schedule. This is important for a variety of reasons. The Mister gets stressed and has to study more before his tests, so knowing when he had upcoming tests not only helped me know when he would be studying more, it also helped me know that if he got grumpy, it was because of a test and not something I did. You can also help him by making his favorite meals the night before his tests or packing him an extra good lunch that day. Even slipping little notes into his backpack or notebook can really help boost their confidence when they need it before those big tests. There were two separate months where the Mister had a ton of tests within the space of two weeks, and it really helped me to know when those tests were because I was able to give him extra support and help him stay positive when he was having a hard time. Knowing when your husband takes tests will help him and it will help you!

7. Let him study. What do I mean by this? When he is at school, do not constantly text him. When he is at home, do not constantly interrupt him by going in and out of the room. Sometimes this is hard when Little J keeps going back to the Mister’s door and knocking on it crying for “dada” but we get through it. It is hard for husbands (at least mine) to study effectively if they keep getting interrupted. The Mister gets into a studying “zone” and it’s better for him to just be left in it so he can get his work done faster and better. So when he is studying, let him study. It’s okay to send an occasional text, but don’t send one every hour. That is not going to help anyone.

8. Do things with your friends. Second year is definitely a busier year than first, especially as your husband starts preparing to take boards along with his regular classwork. So the amount of time you see him may decrease. The best way to handle this is to do things with your friends! I have two friends who moved out here at the same time and we were all pregnant at the same time and we go on walks, have craft days, and let our boys have playdates. It helps because it gives us something to do and it keeps us busy too, which is something that you also need to do while your husband is in school. Sitting at home all day every day is not healthy and it will probably bring you down a lot. And if you aren’t a super social person, don’t stress. I didn’t used to hang out with friends very often in college but making a few good friends out here has really saved me. So be bold and find at least one other medical school wife to team up with. It really makes a difference, especially when your husbands all have a big test coming up and you need a break!

9. Make friends with the first years’ wives. Remember how scary and unknown everything was when your husband first started medical school? You probably moved to a new place, didn’t know anyone or where anything was, and had no idea what to do for fun there? Well there are all these new first years who have moved to your town with wives who are feeling exactly the same way you did at first! So make friends with them! Give them tips you’ve learned from your husband’s first year and hang out with them and show them where all the delicious restaurants are. There weren’t really any wives of second years around us when we moved in, but it would have been helpful to have someone to help me get adjusted. So be that person for all the first years’ wives and it will be good for you and for them.

10. Make him take breaks. Sometimes the Mister has a hard time stepping away from studying and taking a break. So sometimes I have to make him take a break from studying and go to dinner or do something else fun. Especially because they can get so stressed and overwhelmed that they feel like they just constantly need to study, but you know that isn’t going to be helpful when they can’t focus or their confidence is draining. Taking a break from studying can help them clear their mind and get their focus back. I had to do this a few times with the Mister and it always paid off and helped him study harder and more effectively when he went back to studying. And I know I said let him study in tip seven, but you also need to make him take breaks when he needs it. Because sometimes having an outside perspective helps you see that they really do need to take a break or they won’t get anything done. So just let him know that he needs to take a break (or tell him you need him to take a break if he won’t listen!) and go do something fun to help him relax and clear his head.

11. Celebrate when he finishes boards. The summer after second year is when your husband will take his first round of board exams (step one). If your husband is anything like the Mister, he will be studying like crazy the weeks (and months) leading up to his test. So make it a big deal when he finishes! The board exams are harder and more important than any other test he has ever taken because the score he gets will determine what specialty he will be able to go into. It takes a lot of work and they get stressed and worry a lot, so make sure you celebrate when he is done. Do something you don’t normally do, go to a more expensive restaurant, make it a good, happy time so he will be able to relax and enjoy being done with studying for that big giant test (until step two comes at least). Also, don’t overschedule yourselves for the time he has off between finishing boards and starting rotations. You will want to just relax a bit and I promise you that trying to fit everything into your schedule is not going to be fun.

So those are my eleven tips on how to survive your husband’s second year of medical school. Second year is harder than the first, but once it is over then it is over and you can be happy because your husband doesn’t have to go to class anymore! We are looking forward to third and fourth year rotations and in a year I will make sure I come back with more tips!! Good luck ladies!