Mama Renee Osborn shares the traumatic hospital birth story of her third baby on the Honest Birth birth story series! Renee had planned on having a natural birth, but after being diagnosed with polyhydramnios, she had to be induced and eventually ended up needing an emergency C-section. 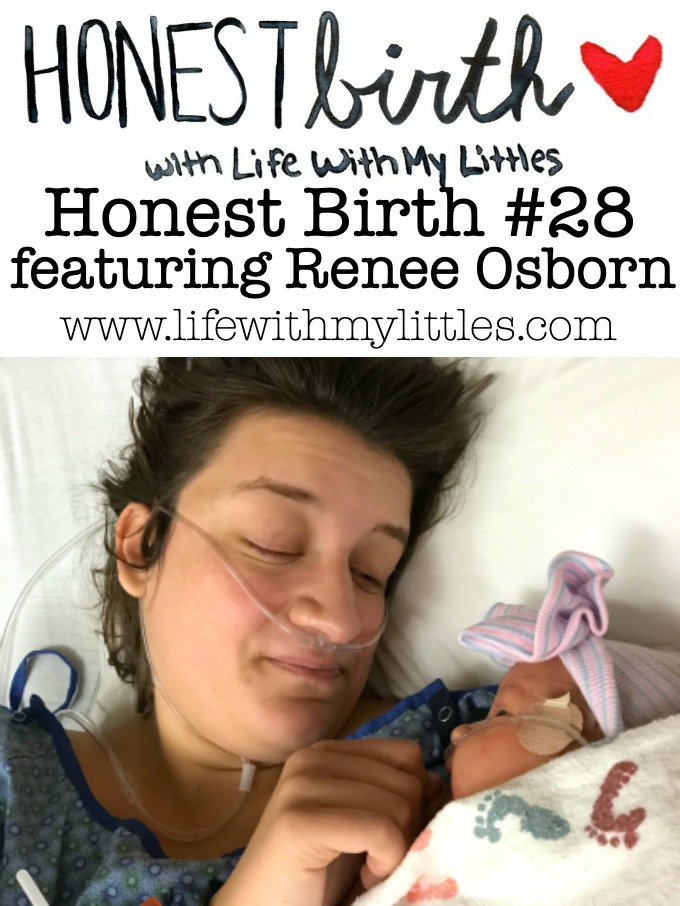 Hey mamas! Welcome to the twenty-eighth post in my Honest Birth series! I’m excited to share another real mama’s birth story, because I think it’s so important to share our childbirth experiences with each other. My goal with this series is to provide a place for women to share their birth stories without holding anything back, as well as compile stories for pregnant mamas to read in preparation for their own childbirth experiences. Every mama is different and every birth is different, and I believe that when we share our stories we help each other.

Today I am featuring Renee Osborn. Renee and her husband have been married for five years and live in Colorado Springs, CO. They have three kids, Avery, Lilah, and Piper, and are expecting their fourth in September! Renee is a stay-at-home mom and is graduating this summer with a business degree. She loves baking, swimming, and outdoor adventures, and you can follow along with her on her Instagram account here. Today she’ll be sharing the hospital birth of her third child, Piper! She had a traumatic birth experience and is still working to process it, but she has a great message to other mamas with traumatic stories, too!

Ready to read her daughter’s story? Let’s do it!

The Birth Story of Piper Osborn

March 30, 2018 was the hardest, scariest day of my entire life. It is also our beautiful Piper’s birth day.

Throughout my entire pregnancy with Piper, I looked forward to her birth. I was excited for a medication-free, vaginal birth, after my 2 previous inductions.

But, around 34 weeks I was diagnosed with polyhydramnios, which just means I had extra amniotic fluid. There are risks with polyhydramnios, including preterm labor, placental abruption, and umbilical cord prolapse, but they are small, and I was monitored closely. Around 37 weeks, I had an ultrasound that showed my fluid levels had returned to normal. After that, they stopped the extra monitoring.

At 40 weeks, my doctor could see that I was extremely uncomfortable after several rounds of false labor and decided to induce me. My instincts had told me all along that my polyhydramnios had not resolved, so I was relieved to finally be able to deliver Piper.

We arrived at the hospital in the early morning hours of my due date, filled with nervous excitement to meet our little girl. The induction began with Pitocin right away, and I had informed the nurses that I would not be receiving an epidural. Even though I was being induced, I had dreamed of an epidural-free birth my entire pregnancy. I was ready.

Contractions began by 10am, and they increased in intensity quickly. My husband, Eric, was rubbing my back, helping me breathe, and making sure my playlist was keeping me happy and motivated. By 4pm, I had been having contractions every 2-3 minutes for most of the day, and they were intense. I was exhausted, but still motivated. But I wasn’t dilating, and we were all getting concerned. I had been at 4cm all day.

Then, my doctor decided to break my water in the hopes it would help dilate my cervix. It was extremely painful–my water had broken on its own with my other two. When we saw the gush, everyone gasped. Then my doctor said, “Well, you definitely still had polyhydramnios.” I had never seen that much fluid!

Almost immediately after my water broke, I knew something was wrong. And then my nurse rushed in and stared at the heart rate monitor in eerie silence. I wanted to ask what was wrong, but I was thick in contractions that seemed to be right on top of each other and couldn’t get a word in.

Then, from behind me, I noticed her pushing buttons and all of a sudden, my room was filled with people. That’s when they told me–Piper’s heart rate was dropping with each contraction and they needed to see what was going on. My doctor rushed in and checked my cervix immediately, and then said, “Ok, I feel cord!” Then the nurse hit the code blue button–Piper no longer had a heart rate.

Her umbilical cord had been pushed into my cervix by the extra fluid, and every time I contracted, it was compressed and stop Piper’s flow of oxygen. My doctor explained she needed to keep her hand in my cervix to try and hold the cord up during contractions, and then we immediately left the room to go to the OR. We were flying through the hall, I was completely naked and exposed, my doctor straddling me with her arm inside of my vagina, as unsuspecting moms strolled the halls trying to encourage their own labors. In a fleeting moment I wished I was one of them.

As we reached the OR, Eric was instructed to stay outside. I knew he would be so worried, and my heart ached to go in this room without him by my side. But I also knew he would be ready to take care of Piper as soon as she was delivered.

They transferred me to a new bed, my doctor still on top of me. She was screaming for anesthesia. I was sobbing and my heart was racing, even as contractions roared through my body, and I was screaming, “Please just save my baby,” over and over. My doctor started yelling, “I need to cut, I need to get this baby out.” Anesthesia was still setting up and the doctor was holding her scalpel. I was still screaming to save my baby, and my doctor said, “I am going to try.”

I was put under general anesthesia, but not before my doctor started slicing open my stomach to save Piper. I didn’t care. I would have stayed awake if it meant they would save her faster.

I remember hearing beeping of monitors as I opened my eyes. I was disoriented, Eric was gone, and I didn’t know where I was. I saw a nurse typing at a computer, and then another nurse carried in a pink, crying baby and my heart began to race. “She’s ok!” I thought excitedly. Then she looked over at me, seeing that I was awake, and said, “I’m so sorry hunny. This one isn’t yours.” And I began sobbing uncontrollably. The nurse came over to me and without a word, increased my pain medicine until I became so drowsy I could barely keep my eyes open. But inside, I was screaming, “Where is my baby? Is she alive? I don’t care about my pain I just want my baby!”

Some time passed, and I was hysterical. I wanted my baby, I wanted Eric, I wanted answers. Finally, Eric came through the doors and I felt a weight lift. “Is she ok?” I sobbed. And then he pulled out his phone, and showed me a picture of the most beautiful gift I could ever imagine–Piper. She was hooked up to monitors and oxygen, but she was okay. I sobbed and sobbed and finally felt ok. My baby was ok.

Later, I learned that Piper had been born blue and unresponsive, and they whisked her out of the room and performed CPR while wheeling her to the NICU. They were readying the Flight for Life helicopter to take her to Children’s Hospital until miraculously, she became responsive. The doctors were completely shocked, but I wasn’t.

Our girl was, and will always be, a fighter.

I finally met my daughter five hours after she was born, and it was the most beautiful moment I could have imagined. I could barely see her through all of my tears, but feeling her warm skin against mine was magic. She wasn’t allowed to eat the first night because all her organs were in shock, but the next morning I was able to breastfeed her, and everything fell into place.

Three days later, all three of us walked out of the hospital, leaving the shock and trauma behind us. The anesthesiologist came to visit as we were discharged and she said she was overwhelmingly shocked that we were able to leave so quickly. “A true miracle,” she said with a smile.

The hardest part of my birth story was the underwhelming response I received from family. Most people said, “Well, it’s ok because everyone is healthy,” as they dismissed the trauma I had experienced. And the reason I wanted to share this story is that it is ok if your birth left you less than ok. It is ok to own your trauma, even if everyone was healthy in the end. The memory of that day haunts me, and for many months afterward I could not close my eyes without seeing the doctor slice me open, saying she would try to save Piper. I have suffered from severe anxiety as I work through that day, and that is ok.

Piper and I share a deep connection from the experience we shared, and every single day I am so grateful to have her here with us. I saw how close we were to losing her, and to have her here instead is truly a miracle. But even still, it will take me a long time to accept her birth story, and if your birth story didn’t go as planned, just know that it is ok to grieve what you didn’t have, and it is ok to take as long as you need to process the emotions that came as a result of that birth. 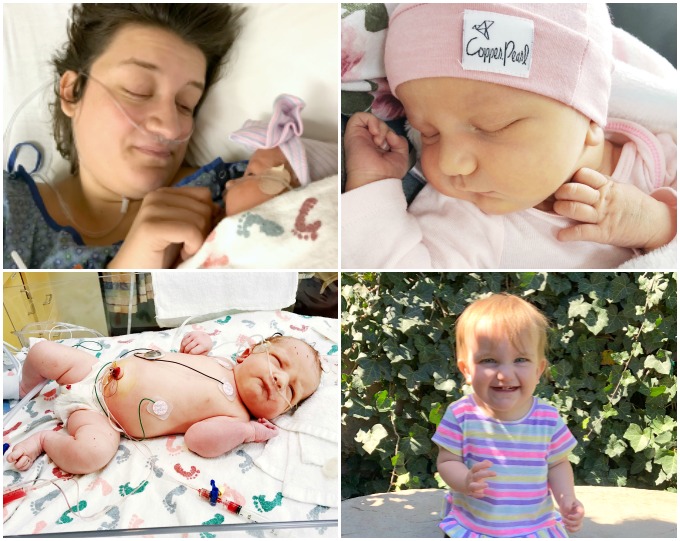 Wasn’t that so inspiring? I love what Renee has taken away from her daughter’s birth! I agree that it’s okay to take time to mourn not getting the birth you expected! Thanks so much to Renee for sharing her story on the Honest Birth series! Make sure you follow Renee on Instagram. And check back next month for another Honest Birth post!